Observations, scaps and videos of this nest. Look for eggs in early July

July 24 2019
We are on pip watch.
Rolling the eggs.
This screen capture or video is courtesy of "EagleCAM @BirdlifeAustralia Discovery Centre, Sydney Olympic Park"

6:59am .
7:26am.
This screen capture or video is courtesy of "EagleCAM @BirdlifeAustralia Discovery Centre, Sydney Olympic Park"

9:10am
Both eggs have pips now!
RangerJudy @RangerJudy
"The eggs were laid some 73 hours apart, and incubation for first egg was delayed by around 20 hours total, even at night."
This screen capture or video is courtesy of "EagleCAM @BirdlifeAustralia Discovery Centre, Sydney Olympic Park"

Welcome to the world SE 23.

I think the oldest chick is very feisty. Here is a video of him/her attacking Lady!

A Matter of Light

**The Story Behind The Image**

Ákos was recently out photographing and managed to capture this image of a juvenile White-bellied Sea Eagle. Little did he know the backstory of this majestic creature at the time.

She'd hatched under the watchful gaze of the Sydney EagleCAM Project which live streams pairs of Sea Eagles as they raise chicks. It attracts followers from all over the world who follow every chirp and flutter. This chick, knows as SE21, was weakened by an often fatal condition, and shortly after fledging (flying for the first time) she got into trouble when her wing got wedged in the fork of a tree near the nest. She caused some terrible damage trying to free herself, but was too weak to do so.

Some incredible volunteers mounted a daring rescue mission under the cover of darkness and extracted her from her predicament. She was badly hurt and then went into rehab with Higher Ground Raptors who brought her back to good health. Released earlier this year, many thought that she may not make it - and so after many months, when Akos posted this image, he was flooded with messages from people who'd recognised her from the damage to her wing.

It looks like she is doing well, despite her traumatic start. She's looking healthy (if her beach dancing is any indication!) and is in good shape. It's so lovely to know that one little photo of this not-so-little bird, could make so many people so very happy. Her fans are thrilled to have this update of their special girl>

**EDITED 2 AUG**
You can now purchase your very own print of this image from our online store http://2madphotographers.pic-time.com/ prices start from $4.95 AUD. Images are printed and shipped by Atkins, a professional photography lab in Australia. 100% of the profit from the sales of this image will be donated to Peggy McDonald from Higher Ground Raptors

Shared from :
" EagleCAM
August 12 at 10:13 PM
13th August, 2019
We have been pleased so far to see little sibling rivalry or aggression between our two little eagles. Yesterday SE23 pecked at and shook its sibling SE24 very vigorously. SE23 is the first hatched and still slightly bigger chick. To date there has been plenty of food for both chicks.

Last year viewers may remember the smaller weaker SE22 died of starvation when food was scarce and the stronger chick monopolised the food.

Although watchers may find this behaviour distressing, it is natural in White-bellied Sea-Eagles and many other raptors. Some raptors and other bird species even always exhibit siblicide, where only one strong chick may survive.

Even though we have seen some aggression from SE23, both chicks are receiving ample food. These are wild birds, it is our privilege to watch them.

If our viewers find this natural behaviour distressing, it may be better not to watch.

Thank you Marsha -" feeding # 4 . joint feeding. Dad started feeding at 15:32 w/ fish he brought in then Lady starts feeding w/ fish she brought in at 1543. Both Lady and dad feeding the chicks and feeding themselves . Dad was feeding 24 mostly and Lady feeding 23 . Once dad had finished feeding 24 and the fish was gone then Lady started feeding both chicks. Dad was also feeding lady . Feeding was over at 16:05 both chicks have full crops and parents too. "

From EagleCAM
·
"WBSE 2019 - Week 3,12-18th August. A mixed week where fortunately the good outweighed the bad. The small occurrences of aggression seen on Monday, Tuesday and Wednesday appear to have subsided for the time being. One day at a time!
Both chicks are eating LOTS. They have pin feathers coming through, causing lots of preening and itching. Parents are still remaining close to the nest, either on the adjacent branch or up behind the nest camera. We had a first for the Sea-Eagles on Friday, when both parents were passing each other food; Dad feeding SE24 and Lady feeding SE23. Awesome to see."
The decent people need to keep being decent. The loving people need to keep loving. The polite people need to keep being polite. Whatever is good don't let it slide , anti it up , spread it around, make it visible.
Top

Aug 19 2019
A SE intruder did a fly by around the nest area. Dad chased. Lady in defensive mode, on nest with chicks. Dad soon came back with a fish and parents went back to nomal behaviour.
Quotes from FB posts.

"Se McGregor .During the summer, a sub-adult visited the nest - one of ours? Don't know. Many times, we have seen random visitors to the river roost area. Big river system, Perhaps some follow it towards the coast. There are a few nests on the Nepean and Georges rivers (west and south). The closest nesting pair would be in Middle Harbour, roughly half way to where SE21 has been seen lately. In a nutshell, Homebush Bay / Olympic Park is the geographic cente of Sydney, a city of 4.5 million people. WBSE choosing this location is probably best described as unusual. Judy has followed eagles in the area for many years The nest which fell down in 2011 was 25 years old.
Two years ago, a first year, sexually mature female tried to move in on the territory. Unfortunately she died after fighting with Lady (and/or Dad). Parents will always defend the territory first, so SE19 without Dad/Lady to keep him/her warm died from hypothermia (4 days old).
There will always be single Sea-Eagles looking for a home that may "happen" upon the reserve in their travels. It is quite unusual to see passing Sea-Eagles in the forest but not un-heard of. Majority of Sea-Eagles live in coastal areas. There are reasonably dense populations in Broken Bay (where SE21 is) and Jervis Bay."

Aug 21 2019
4:53pm. Eel was brought to nest by Dad. TY Se McGregor .
4:54pm. A few bites for chick then Lady took it off nest.
5:36pm. She came back on nest with eel and feeds chicks.
5:44pm. Well fed chicks!
This screen capture or video is courtesy of "EagleCAM @BirdlifeAustralia Discovery Centre, Sydney Olympic Park"

August 25: Big thank you to Toni Castelli-Rosen for preparing the compilation growth chart of SE23 and SE24's first four weeks 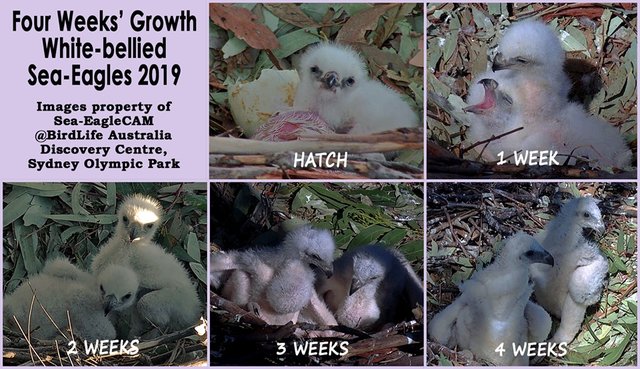