This area is for recording observations and photos of eagle nests in BC with Ground Observers.

This thread is for Discussion, Observations, Photos & Videos related to events/occurrences at the Lafarge Nest

NOTE:
The Lafarge Vancouver Bald Eagle Nest discussion topic is somewhat unique among the nests in the Ground Observers forum in that it was originally one of the HWF featured cams. However, the nest no longer has a camera focused on it. In October of 2014 the nest tree along with the closeup camera were destroyed during a windstorm. The eagles then moved back to their original nest - which they abandoned in favor of the Lafarge site in 2007 - located at Pandora and Kamloops streets, approximately seven or eight blocks east of the Lafarge site.

For the past four years, with the aid of a security camera which had the capability of scanning the entire Lafarge site and surrounding area, including the artificial nest located just next to where their nest tree had once stood, we were able to view and report on the lives of the Lafarge pair as they defended their territory from the vantage point of the artificial nest. Between the observations from the cam and and ground observations from members who diligently observed and photographed their comings and goings at the nest itself, this nest continued to be one of the HWF featured nests. However, this past season (2017/2018) the security cam failed and unfortunately will not be replaced.

Consequently, as there is no longer a cam from which to view the Lafarge family, their discussion thread will now be located in the Ground Observer's forum where they will continue to be observed and photographed by their loyal followers.

Links to the start of the current and previous season's discussion in this thread: Following are links to discussion threads of past seasons and other pertinent information re the Lafarge family: Map of the area showing the Lafarge artificial nest (right next to the Lafarge nest tree) and the Pandora nest in relation to one another: (Click all photos for a bigger version)

For a more detailed view of the Lafarge artificial nest site in relation to the Pandora nest and the surrounding area as was seen by the side view cam, our ground observers and google earth, please CLICK HERE.

Eagle return dates from past years:

The season started off with the return of Pa on September 25th followed by Lady on, we think the 27th. They were seen together for the first time on Oct 6 at 8:26 am. Pa and Lady spent the next few months refurbishing their nest, defending their territory and bonding. It was determined that eggs were laid on Mar 25/26 approximately and feeding behaviour observed on April 30. It is believed the hatch took place about April 28/29. The first eaglet, Apollo, was first seen on May 11, and the second, Artemis, on May 13. The following weeks saw both chicks thrive under the watchful eye of their parents until they fledged on July 23 when they were both seen flying around the nest tree - the first fledge seen at 12:45 pm with the second soon following at 1:23 pm. All and all it was a very successful season.

Egg(s) Laid: adults seen in nest as if incubating starting March 7, though the first egg may have been laid after that - some adults seem to practice before the first egg

Egg(s) Hatched: feeding seen April 22 (that's 46 days from March 7, so it's likely that the first egg hatched at least a few days earlier)

Sad News: Lady has not been seen since April 30

(some dates added by JudyB)

One adult spotted on top rail of the AN at 9.50 AM this morning folks. I'll let everyone know if I spot anyone over at the Pandora nest tree in the days to come

Thanks steamer ... this is good to know !

Thanks for the update Steamer. The other day an eagle flew over me and I hoped it was one of our feathered Lafarge friends - maybe it was!
Top

Thanks, Steamer! That is wonderful news! Looking forward to another successful season!

Again today in the pouring rain one of the pair spotted on the top rail of the AN. Nobody spotted hanging around at the Pandora nest location yet. Eastvan Girl you may luck out and see one there very soon

Happy new season.
We drove by the AN again for the 3d time yesterday Oct.29th at about 6:45 pm and eagle was still on the AN. which means that someone was sitting there pretty much all day long. It must feel good to be home again and finding that all is o.k.

We don't know yet who is home and we have seen only one eagle at a time.

I'll be keeping my eyes peeled for them at the Pandora nest - glad someone is home!
Top

No visual sighting today but all the telltale sign of a very recent visit at the Pandora nest. Big white wash on the sidewalk underneath the nest tree and I found a lovely eagle chest feather a few feet away

Wish I had the camera......Adult right on the very top of the Pandora tree at 11.40 AM. Could have been Lady due to the size but regardless one lovely sight on a beautiful fall morning

6:15pm
Hi everyone,
Been looking everyday at the Pandora tree and just now I too spotted an eagle at the tree. I am thinking it is Pa but could be mistaken, just so pleased to see one of them back at the tree. Happy Thanksgiving everyone!
Top

This leads me to think it was Lady I saw on the top of the Pandora tree the other day and Eastvan Girl had a sighting of Pa at a different time that day at the Pandora tree.

Pa on his favorite westerly perch beside the Pandora nest at 2.05 PM....looks good

Hi Steamer,
I saw him there today, also. He's been at the nest quite a bit today - and on Tuesday I saw both Pa and Lady at the Pandora tree in the afternoon.
Top

Such good news that our couple is back and ready to start a brand new season. Thank you for the updates to our very committed ground observers!
Top

Both eagles still hanging around folks....

At 9.15 AM one perched high up on a southern branch at the Pandora nest and at 9.25 the other spotted on the top rail of the AN.
Top

Thanks, Steamer! Glad to hear they are following their normal routine!

Lots of activity around both the Pandora nest and AN today folks.

First up were several flights and a few nice landings on the nest at the Pandora location around 9.20 AM this morning. Witnessed a few trips to the tree and some flights around the neighborhood in the high winds around this time by one of the pair.

Next up was eagle flights and landings in the high trees east of the AN. Lots of crows in tow during these observations about 10 minutes after the Pandora location observations. Nobody perched on the AN during this time.
Top

Been a while since I last posted but wanted to let everyone know that the pair has been around every day. I see them on the AN usually as a pair on the top rail in the morning. Later in the day one on the AN and the other at the Pandora tree.
Top

Thanks for the update Steamer! That's what we like to hear - all things per usual and going smoothly!

If our eagles have gone to Harrison to eat salmon, then just for a daytrip because they have been been seen around
their home daily by Stan.
They do spend some time at their hometree but mostly they like to sit together at the AN.

This picture was taken by Stan today at 10:52 am.
Pa is sitting in front and lady is sitting closer to the mountains,(it looks like she is sitting to the right of Pa.)
They both are facing South.
What a mighty sight.

The next picture was taken by Stan a week ago, Nov. 18th at 11:04 am.
Lady is sitting to the right of pa facing the mountain and pa is facing south.
Pa likes to sit where he is sitting right now therefore I know that Lady joint him on his site.

She seems to still be very much taken by Pa. 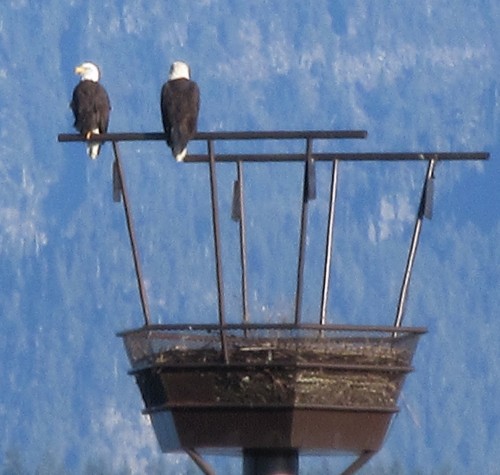 Good Morning everyone..... and so happy I stopped in here...... thanks Annemie for posting all the wonderful pictures of Lady and Pa ~

Good morning Irish Eyes thank you for stopping by.

By this time it was starting to get dark.

I must say it is a very nice spot to hang out.

I hope that everyone here has a nice week.

Thank you all for the reports and the pictures of our pair - glad to hear that they seem to be following their usual off-season routine.

If our eagles have gone to Harrison to eat salmon, then just for a daytrip because they have been been seen around
their home daily by Stan.


I must admit I am wondering who the 8000+ eagles going after the salmon in the Harrison Mills area are - like Pa and Lady Lafarge, all of our on-camera pairs seem to be spending time near their nests - and while the Harrison Mills pair is close to the action there, the pairs at Delta, White Rock and Surrey Reserve would have a ways to go if they wanted to feast on the salmon there. There are lots of adults in the pictures, so it's not just the younger, non-nesting eagles who are there. One of life's little mysteries, I guess.
2020 Eaglet Info ~ ~ ~ ~ ~ Helpful Hints
Top

Return to “Nests in BC - with Ground Observers”