This area is for recording observations and photos of other North American eagle nests with Ground Observers.

Welcome to the continuation of my Wappapello, Mo. // Reelfoot, Tn. Lakes' Eagles' thread. Wappapello Lake is located in the southeastern Ozark foothills of Missouri. Lake Wappapello is about 8,500 acres and stretches for 30 miles along the valley of the St. Francis River. The source of the name is unclear, but Wappapello is probably what pioneers called a Shawnee Indian chief whose name was similar. It is about 100 miles south of the St. Louis area. {there are many regular visitors from St. Louis and surrounding cities due to the State Park on the other side of the lake, hosting several campgrounds, swimming beaches, etc.}
The lake is managed by the U.S. Army Corps of Engineers as a flood control reservoir, which means most of its banks are wild and natural, except for places that provide necessary services. Bird watchers will enjoy viewing eagles at Wappapello year round now, with nests on and near the lake. In winter, Missouri is one of the nation's major wintering ground for eagles and many of them show up at Wappapello. Eagle and wildlife photos from close-by Mingo National Wildlife Refuge, Duck Creek, and surrounding lake areas will also be included. Located in the upper end of the lower Mississippi River valley, Mingo Refuge, at 21,592 acres, is the largest remnant of bottomland hardwoods remaining out of an original 2 1/2 million acres in the Missouri bootheel. A major migration and wintering area for migratory waterfowl, populations of 125,000 mallards and 75,000 Canada geese have been recorded. Bald eagles have been successively nesting on the refuge since 1985... In the most southeastern part of Missouri, thousands of snow geese can be seen in the winter, soaring above the wetlands and crop fields. A drive to southern conservation areas such as Ten Mile Pond, Otter Slough, and Duck Creek can result in better waterfowl identification

...“February is a great time to see northern pintails, gadwalls, and American green-winged teal in the fields and mallards in the timber,” said Keith Cordell, manager of Duck Creek Conservation Area. “Duck Creek is a place where you can drive along the borders of the timber and fields and really get a good look at these ducks.”

Behold the birds of the heaven, that they sow not, neither do they reap, nor gather into barns; and your heavenly Father feedeth them. Are not ye of much more value then they? ~ ASV Matt. 6:26
Member since: 08/16/06 with Previous Posts: 4386
Top

Reelfoot Lake is an 18,000- acre natural area located in Lake and Obion Counties in northwest Tennessee. The lake was created by a series of violent New Madrid fault zone earthquakes in the winter of 1811-1812. The lake and surrounding forests attract a large diversity of wintering and breeding populations of waterfowl, and boasts a significant population of wintering bald eagles. Reelfoot is also recognized by the United States Department of Interior as a National Natural Landmark. It is one of only fourteen National Natural Landmarks in Tennessee. These landmarks are recognized as the country’s best remaining examples of major biotic communities and geologic features.~~~The natural area includes about 10,900 acres of open water and marshes, and about 7,100 acres of bottomland hardwood forests and cypress dominated bottoms and sloughs. The large expanse of such diverse aquatic and terrestrial plant communities provide a great number of habitats for wildlife. Reelfoot Lake is considered by some birders to be the best place in Tennessee for bird watching and in fact has been designated an Important Bird Area by the Audubon Society. Over 270 bird species have been reported from the Reelfoot Lake area. This list includes numerous rare birds. Winter is an excellent time to observed waterfowl and bald eagles. The Reelfoot Lake State Park staff offer eagle tours every winter. Reelfoot also offers plenty of opportunities for seeing different species of snakes and turtles, amphibians, mammals and invertebrates such as butterflies and dragonflies. For these reasons, Reelfoot Lake is a premier place for outdoor recreational activities such as wildlife viewing especially bird watching.......There are at least 14 rare bird species benefiting from this large aquatic/terrestrial landscape. These include the bald eagle, Swainson’s warbler, peregrine falcon, and Mississippi kite.....There are eight rare species of animals including mammals, amphibians, and invertebrates protected at Reelfoot Lake. The diversity of habitat and the large scale and continuity of the landscape offer a significant refugium for all types of wildlife that are migrating through or inhabiting this Mississippi River floodplain. View more information about Reelfoot Lake State Park.

We spent President's Day 2/19/18 at Reelfoot Lake, and were able to catch an eagle on a nest.

^ click 2X biggest ~ One of the nest trees ^ on the Mississippi River levi, where we found this eagle. 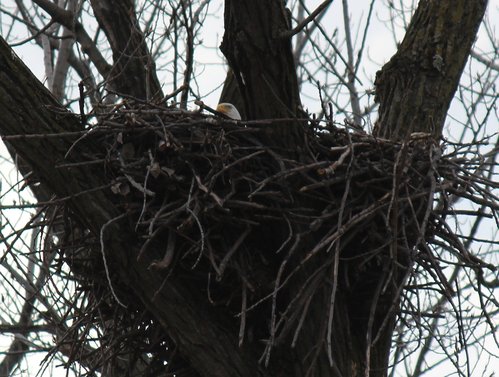 ^ click 2X biggest ~ It was so windy, the eagle never raised up any higher.
Looks like the larger beak depth ~ the female

^ click 2X biggest
Behold the birds of the heaven, that they sow not, neither do they reap, nor gather into barns; and your heavenly Father feedeth them. Are not ye of much more value then they? ~ ASV Matt. 6:26
Member since: 08/16/06 with Previous Posts: 4386
Top

^ click 2X biggest
Behold the birds of the heaven, that they sow not, neither do they reap, nor gather into barns; and your heavenly Father feedeth them. Are not ye of much more value then they? ~ ASV Matt. 6:26
Member since: 08/16/06 with Previous Posts: 4386
Top
Post Reply
3 posts • Page 1 of 1

Return to “Other North American Nests with Ground Observers”