This a new cam is HD with IR for seeing the nest at night .. No sound !


I am posting this with thanks to Judy B......this is all her documentation.

The nest is in the Sequoyah National Wildlife Refuge, near Vian in eastern Oklahoma, near the Arkansas border. This is the Sutton Center's second nest with a cam (their first featured a pair that nests about 125 miles away, at Sooner Lake in north central Oklahoma; it's currently offline). The refuge is in the Central time zone.

The pair laid three eggs in 2011, the first year with a cam, though one disappeared before the cam came online. The two remaining eggs hatched, and both chicks fledged successfully; the younger was given a GPS transmitter, and you can follow his travels here. The pair again laid three eggs in 2012, and all three hatched, but the youngest chick was significantly smaller and fell behind in development, probably because food was a bit scarce; he was holding his own, and usually getting some food - but sadly died, probably of exposure, when he was about 5 weeks old - there was a heavy rainstorm, and his older siblings had feathers to help protect themselves from the cold rain, and he still had mostly down. The pair has laid two eggs to start the 2013 nesting season, so we are hoping both hatch and thrive.

Well, 2013 was an unusual, and ultimately non-productive nesting season here. There appeared to be an intruder or intruders who disrupted the nesting starting about 3 weeks into the incubation period; adults were off the eggs 30-60 minutes initially, and eventually only incubated for a couple of hours per day; they eventually resumed incubation, but the eggs had been uncovered in freezing weather for hours at a time, and often uncovered overnight, so sadly there wais no realistic chance the eggs will hatch. One egg collapsed January 30 (52 or 49 days after laying) and the adults were last seen on the nest February 2 (and incubated the remaining egg for a while that day). Then a great horned owl started visiting on February 3and appeared to incubate the eagle egg during the night Feb 4 & 5, spent the day on the nest Feb 6 - and laid an egg Feb 7! She laid a second egg two days later, and incubated them and the remaining eagle egg. The eagle egg and one owl egg disappeared overnight Feb 15-16; the second owl egg and the owl were gone when cam came online the morning of Feb 26; as of Feb 28, the owl had not been seen, though there would be no reason for her to return to the nest if she lost the egg. The eagles have not been seen since Feb 2; both owls visited the nest the morning of March 3rd, and one was on the nest as it got dark that evening, though there's no IR, so she(?) may have left as darkness fell. A pair of osprey also visted the nest later in the spring - busy nest!

No one used the nest in 2014 - though a local observer believes the pair had a successful season, though it wasn't clear which alternate nest was theirs, so we don't know how many chicks they raised.
2015 was a sad year - we think there may have been a new pair (chatters felt the female did not look like the one from previous years, and the male seemed very tentative the first few times he tried to incubate their two eggs); I focused on other nests once the eggs were laid and things looked OK, but when I checked back after a couple of weeks, it appeared that only the female was incubating the eggs; the male was in the area, and would come to the nest some of the time when the female left, but we didn't see him bring food or tend to the eggs, which were left uncovered (often for long periods of time, given the chilly weather) while the female was off getting food.. Against all odds, the first egg began hatching but couldn't complete the hatch process and was removed from cam view by the male; it looked as if there was a pip in the second egg, and I'm hoping the hatch process had stopped before the female abandoned the nest. I know new/young pairs often don't get all the necessary skills in the right sequence initially, so am hoping for a better year in 2016.
Rest in peace, little almost-chicks
The nest cams failed in 2016, but they reported at least two chicks; I haven't been able to find out if they fledged. There were two eggs in 2017, one hatched, and that chick fledged successfully.

I will Add 2018
The eagles laid 3 eggs .. two hatched and both chicks were thriving and doing great and when the chicks were almost 4 week old ... we lost the cam and sadly it didn't come for the rest of the season ! I wrote Suttion when the chicks would have been 9 weeks old and this was report
I heard from Dan at Sutton ..

Hi Bev, sorry, we have not been in touch with them for a while. We have not had many severe storms yet this spring, so I would expect that they are doing well. It is possible that the Sequoyah Refuge Facebook page would have some kind of update.
Dan

2020 Judy B
February 9 - sad news: it appears that Mom's right leg was injured around 5 pm on February 8 while defending the nest from an intruder; so far she has not been able to move to the nest cup and incubate, and the eggs have been left uncovered for long periods of time, including several hours during the night; today is day 36 for the first egg, and we thought the adults had begun listening, as they do when the preliminary stages of a hatch begin. We're hoping for the best - and don't really know what would be best since we don't know when or if Mom will be able to do more than perch on the nest - as they say, we need to trust the eagles.
February 13 - one of the eggs was damaged in the attacks and the remains were eaten by the female Sunday evening, February 9; the remaining egg has been uncovered for long periods of time, and it's highly unlikely to be viable at this point. We think Mom is doing some of the incubating, and her leg seems better, though it's hard to catch her moving about on the nest (this cam doesn't have an option for dvr). From the actions of the adults, I suspect there are still intruders in the area - and I think the resident pair is winning.
February 18 - the remaining egg was being left alone quite a bit, and I noticed a woodpecker appear to peck at it a few times, though I don't know if the egg was damaged. The egg appeared damaged the morning of February 15, and disappeared by evening; I read that the remains were eaten by one of the adults but haven't found the post where that was observed. In the good news department, Mom seems to be moving well and using the leg that was injured.

I heard from Sequoyah re the fishing areas for this nest

With thanks to Chad Ford

Cam went down March 3 and never came back up !

Video with thanks to Deb Stecyk .... https://www.youtube.com/watch?v=yfUcPdywR-8

Video with thanks to Trudi Kron

Cam was up
at times after that !

I am posting this here FMI

Good Morning Sequoyah Eagle and everyone and welcome to our new nest thread!

Looking forward to a successful season on this nest

From Trudikk Sept.22
' Sequoyah eagles Oklahoma 9 22 10 645pm Okee (male) was at the nest checking it out this evening just before dark.
1st eagle I've seen at the nest this season stayed over 15 mins before flying off
I do believe it was Okee due to he was using the tree perch like he had used in the past

The cam was blurring up so I edited this video best that I could.. I was still very excited to see that a eagle had flew into the nest

** There is no sound on this cam ..Sound came from another cam running in the background Sorry about that **
Video
https://youtu.be/aYxbB41q1J0

Thanks so much Trudi for the s'caps and video !

Eagle perched above the nest

Thanks Ferenz for the s;cap!

7:41am
Female still in the nest

7:54am
' Female looking over the nest

8:06am
I missed the female leaving ,nest is empty

Good Morning , bonjour Sequoyah Eagles , Philjo everyone ! Thank you Philjo for you s'cap and observation!

Dark and windy at the empty nest

I sent a message to the Sequoyah NWR and asked how to go full screen on the eagle cam..
This was there reply on 9 27 18 was
Fullscreen is not currently supported.

Sequoyah eagles Oklahoma 9 27 18 709pm Eagle At nest stayed 15 mins
This eagle did not seem to be one of our nest pair
it had black on tail & dark spots on each 'sides' of head with a dark spot on forehead above its beak. 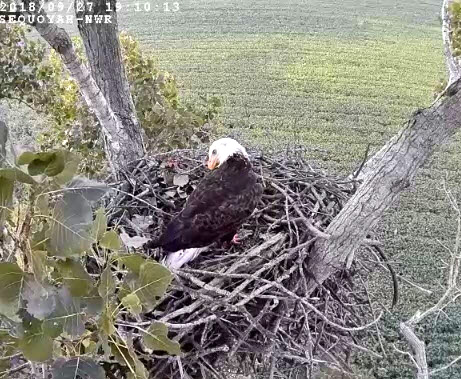 
Good Morning everyone ! Thank You Trudi and Ferenz for the updates!,

'In comes the mate with a stick 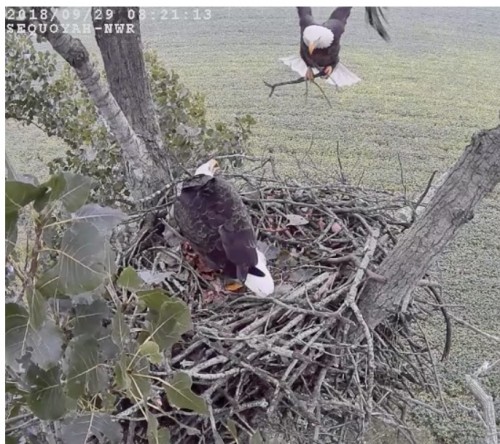 8:27am
One perched above the nest ..Other on in the nest

8:29am
I missed the one leaving that was perched above the nest ... Other one is still in the nest

And back with another stick

One flew to perch above the nest
8:35am

One left the perch ? Mom still in the nest

8:45a \And back with another stick 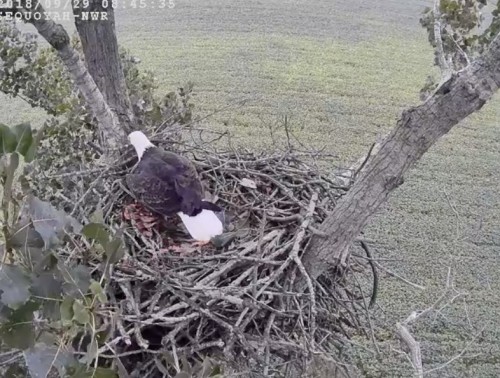 Sorry I have to go ! Wonderful to see our Resident Pair !

It was wonderful to see our Resident Pair !

1:14pm Peeking in here...windy and sunny at the empty nest ...can see the leaves moving

5pm
Same as above

Good Morning Sequoyah Eagles and all who watch this nest !