WELCOME to The 2021 Osprey Season

Mrs G has returned to the Glaslyn nest! The iconic Welsh osprey has now returned to Wales for her 18th season, landing at 08:42 this morning! A remarkable achievement for a remarkable bird.

And Mrs. G back, what a delight this drop in on the Forum has been.
Thank you Ferenz,
carolyn
An upside down dog is a happy dog dreaming sweet dreams.
carolyn
Top

Mrs.G returned with big fish for herself...

13 April 2021 - Mrs G laid her second egg this afternoon. Aran joined her on the nest a little later, after he was seen chasing another osprey in the valley.

Mrs G has laid her third egg of the season at 16:30 today. As if that wasn't good news enough, we are now also live streaming two cameras from the nest, so you never have to miss a moment of the excitement!

Ferenz, these nests are all doing well and it is a delight to see it. This is my response on all of the them in the Isles and thanking you for keeping up with them. I check in.
carolyn
An upside down dog is a happy dog dreaming sweet dreams.
carolyn
Top

Fierce gusts today and a well known intruder appeared in the nest: female KS8 - hatched at Clywedog in 2018 -tried to push MrsG off the eggs. Aran went for a fish & returned, MrsG overtook and flew off...

...Aran chased the intruder. Later all things had calmed down, breeding pair reunited.

That well known intruder needs to find a nest and mate, yes?
carolyn

Lots of mature UK-ospreys as well as KS8's brother KS7 - who joined the Glaslyn nest also - are migrating through Wales! They know where the best nests and breeding homes are, of course Glaslyn, Dyfi, Manton Bay and others. These competitive platforms are perfect.

While you are waiting for the official version - here's mine.

The cam was dreadful, freezing and skipping all the time - so I re-recorded some of it from rollback but it was bad there too, so I only used mine. Also worked on the sound but that's only marginally improved, what with the raging wind. Hopefully Glaslyn will have better.

Also, there was a lot of zooming etc, which caused some action to be missed.

KS8 was amazingly aggressive - including passive-aggressive, I'd say, and utterly determined - and hungry, she did fly off with the fish-piece in the end.

Thanks Ferenz...that was fascinating. She does deserve her own home, hopefully will find it, not try to pilfer another.
carolyn
An upside down dog is a happy dog dreaming sweet dreams.
carolyn
Top

Look at that adorableness, so precious and little osprey. Congratulations Mrs. G and now awaiting number 2.
carolyn
An upside down dog is a happy dog dreaming sweet dreams.
carolyn
Top

Double the cutness, double the fun....thank you Ferenz.
carolyn
An upside down dog is a happy dog dreaming sweet dreams.
carolyn
Top

22 May, an awful day, tormented by corvids and NO fish ~ by scyllabub ©Bywyd Gwyllt Glaslyn Wildlife 1


As many of you are aware, yesterday was a harrowing experience watching the Live Streaming, as Aran had not delivered a fish to the nest since Thursday.

Last night we lost the internet connection at the Visitor Centre, which required a manual reset. We decided to wait until this morning to restore it. After considering the situation this morning, we have decided to temporarily suspend the Live Streaming whilst we continue to monitor the situation on the nest. We will provide you with updates when we have significant news to report. This morning Mrs G is keeping the chicks warm and dry, and they are looking strong. Aran has returned to the nest without a fish.

We assure you that we will do our very best for the ospreys, but we cannot guarantee a ‘happy ever after’ outcome. These are wild birds, this is nature, and nature is unpredictable. Thank you for your understanding and support during this anxious time for all of us.


We have some sad news. Unfortunately, the eldest chick died in the nest late this afternoon. The other two chicks still appear to be quite strong and we can only hope that they will make it through this very difficult period. Mrs G continues to incubate them during the wet and windy weather conditions.

Aran appears to have a couple of primary feathers missing from his right wing. They were intact on Thursday night when he went to roost, but missing when we next saw him on Friday afternoon. We do not know what happened to him, but he is still able to fly and appeared to be getting stronger during today. We desperately hope that he will be able to quickly recover and go fishing again.

Thank you to everyone for your kind words and continued support. This is an extremely difficult time for us and as we are sure that you will appreciate, the decision to stop live streaming at this time was not taken lightly. Our Ospreys are our priority and we assure you that we are doing our very best for them. 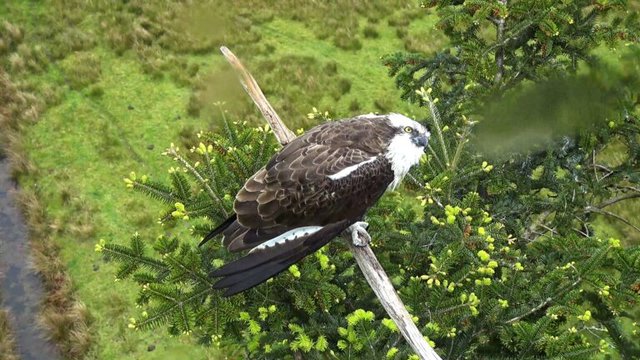 No guarantees anywhere......so sorry. Hoping for the best and for Aran to recover.
carolyn
An upside down dog is a happy dog dreaming sweet dreams.
carolyn
Top

An Important Update from the Glaslyn Nest 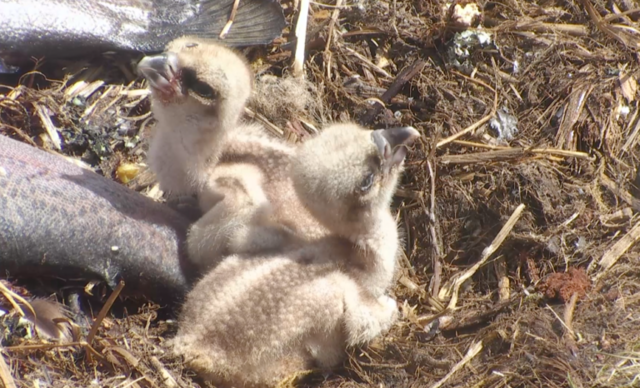 We know the last five days have been an incredibly anxious time, not only for staff and volunteers of BGGW, but also for you, our loyal supporters. We would like to share this update with you, explaining the actions that have been taken behind the scenes since Friday last week.

When we left the Visitor Centre on Thursday evening 20th May, a storm was already raging. Mrs G still had the remains of a fish on the nest when Aran left at 19:42 and we assume he went fishing.

It was 15:02 on Friday before Aran landed on the nest again, without a fish. Aran repeatedly left the nest throughout the afternoon and evening, returning without a fish. This caused us great concern as Mrs G had fed the remains of the previous day’s fish to the chicks at 12:04.

We originally thought Aran’s failure to provide fish was due to the flooding after the storm, which was so bad we were unable to open the Visitor Centre. However, we observed Z2/Aeron delivering a fish to the Pont Croesor (FotO) nest on Friday evening.

By Saturday morning, when fish was still not delivered to the Glaslyn nest, it became clear that there was another reason for Aran not being able to fish. It is at this point we noticed he had missing primary feathers from his right wing and he was visibly fatigued.

With the third chick now hatched, it was becoming a matter of urgency. Mrs G was increasingly agitated by the crows, who no doubt sensed she was stressed and vulnerable, having to protect the chicks by herself on the nest.

As we had never previously encountered such a situation, we sought advice from osprey expert Dr Tim Mackrill whose advice was to provide Aran, Mrs G and the chicks with fish until Aran returned to health. He suggested that fish could be placed on a feeding station close to the nest where the adults would see the fish.

This was going to be a challenge, but we took advantage of the Live Streaming going down on Saturday night to provide supplementary feeding. Carrion crows are a constant threat to young chicks who are at risk of being predated, therefore, we had to place the fish between dusk and dawn, when the crows are roosting.

The following day, Sunday, Mrs G fed the chicks regularly and they looked healthy. Aran, who had not eaten since Thursday, arrived at the nest, and tentatively ate some innards before tackling the flesh of the trout. He ate well for the rest of the day.

Throughout Sunday, Mrs G and Aran were troubled by the crows and also by KS8, a young Clywedog Osprey who had previously visited the Glaslyn nest. KS8 landed on the nest close to the fish and while she was tolerated for a while by the resident pair, Mrs G sent her away with a flea in her ear. Aran also chased after her and it looked as if he had gained strength from feeding.

Aran looking stronger but his right wing still does not look right.

Sadly, the first chick died in the nest late on Sunday afternoon. It had been eating well previously and the cause of its death is unknown.

We were confident at this stage, that Monday morning would bring better news as there was still a whole fish left on the nest. But, shortly after 7am, KS8 landed on the nest and stole the fish. Fortunately, Mrs G had fed the chicks earlier.

This was a real set-back as we could not provide more fish until dark lest the crows predate the chicks if Mrs G left with Aran still not strong enough to defend the nest.

We feared for the chicks during the day, but they remained surprisingly strong despite not being fed. Mrs G and Aran continued to defend the nest against the crows. Aran moved from the short perch to the nest edge to be closer to the chicks and to defend them better. Mrs G also removed the dead chick from the nest.

Aran flew off to roost in the early evening. At dusk, supplementary feeding was again provided and Mrs G, who appeared to be starving, attacked the provided fish voraciously, eating for a full fifteen minutes.

Today, Tuesday, Mrs G has continued to feed the chicks and Aran has returned to the nest and has fed well throughout the day.

Our intention is to continue to provide fish until Aran’s condition has improved and he is able to consistently fish for his family.

This all was unexpected, unpredictable and sad. What they have done for them is heroic. Now to keep away crows and stealing osprey. That last bit is just totally unfair. Thanks for the report. I am hoping for them.
carolyn
An upside down dog is a happy dog dreaming sweet dreams.
carolyn
Top

6 hours ago: We have some very sad news. Unfortunately, Cyw 2 died in the nest 11:32 last night. It hadn't been looking well yesterday and did not feed all day. We can only hope Cyw 3 makes it through this difficult period

The worst outcome I never expected...It's all over now Boblets blue


We are incredibly sad to share the news that Chick 3 died in the nest at 18:30 this evening. It has been a devastating week and a sad and challenging breeding season for Mrs G and Aran.
RIP Glaslyn chicks of 2021. 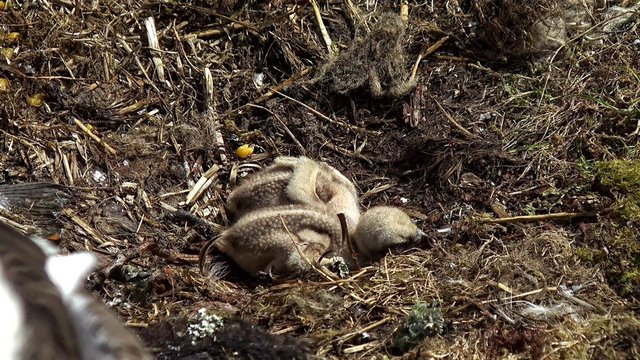 Bonjour Ferenz, Carolyn
So sad for you and for all the Glaslyn family after that terrible tragedy