WELCOME TO THE 2019 SEASON OF THE HALIFAX OSPREY NEST


You Tube link to this cam


THIS NEST IS ON ADT

Thank you N.S. Power and the Halifax Museum of Natural History for this cam and thank you HWF for featuring it on your website along with a nest thread where we can post our observations, scaps and videos......giving us the opportunity to learn about these beautiful birds....

In 2008 Nova Scotia Power and the Nova Scotia Museum of Natural History launched the Osprey cam to track the family of Ethel and Oscar and their offspring.. after nesting on a utility pole, power line technicians moved the nest to a safe location where the Osprey have returned to each spring.. for the protection of the birds the actual location of the nest is not released.

Egg Incubation Period... 35-42 days.. and we have seen the eggs hatch later in some cases.

Dad and Handel Sept .7 ..Handel 12 weeks + 2 days old ( 86days ) We believe that Dad and Handel took shelter the morning of the storm and left the next day Sept.8 when the cam was down .

Bonding. The pair are confirming their bond from last season.

Mating, you will see the female's tail up.

Possessive, you will see a quick on and off by the male, and other indications off territory disputes.


2014 Ground pictures of this nest

The annual migration by Ospreys from northern breeding grounds to southern wintering spots and back again never ceases to amaze or raise questions. Here, Dr. Bob Kennedy answers a few

Read Here and Scroll Down

Osprey with fishDescription: Also known as the “fish hawk,” ospreys are raptors that are well adapted for fishing. They have long legs and large feet with specialized barbs on the pads, hooked talons, and a reversible outer toe that allows them to easily grasp fish with two toes pointing front and two pointing rear. They have an oily waterproof coating on their wings, and they can close their nostrils when they plunge into the water. They have slender bodies and long wings that are bent at the ‘wrist’. Their strong wings give them extra lift to fly up and out of the water with a heavy fish. They have a black bill with a sharp hook for eating fish.

Here is great article on

Bird Emotions
Do Birds Have Feelings?

Re Bobbing their heads

Excellent Article by Judy B

Note of interest.. Mc Nabs Island is across the water from where live... we went there a few times in our row boat !

well I only went once !

I guess what I am saying is that Fledging osprey are not taught to fish.. they learn on their own and by watching ... another example is Osprey in Hack Towers .. they are on their own..

May 22 Intruder on the nest


Posting this here for now


There are over 300 species of birds of prey in the world, but just one of these has evolved to eat fish only - the osprey. So over the last 15 million years they have evolved some pretty cool adaptations to make them superbly suited to a life of catching and eating fish. Here are 10 of them:


1. Osprey legs (tarsi) are reticulate (scaly). Think of a goalkeeper which has padded gloves for better gripping of the ball. Same with ospreys and scaly legs to better hold on to its prey.
2. Most raptors have toes which vary in size, ospreys don't. All four of its toes are the same length.
3. Most raptors have talons with groves in them, running along their length. Ospreys don't - their talons are perfectly round.
4. Unlike any other raptor (excluding owls), ospreys can reverse their outer toe. Normally, they have three toes pointing forward and one back when perching. But when grabbing a slippery fish, they will hold it with two toes pointing forward, two back. This toe arrangement has a posh Latin name: Zygodactyly.

5. The osprey has large, scaly feet with sharp 'spicules' (little spines) beneath the talons for better grip of slippery fish.
6. Ospreys have a specialised intestine with very strong enzymes to break down and absorb their fish meal - even the bones. Ospreys very rarely cough up undigested pellets like some other birds of prey do.
7. Ospreys have a strongly developed uropygial gland (Oil gland). It is situated at the osprey's rump by the tail feathers and the osprey spreads the oil produced around its feathers by rubbing it and then preening. It has both a waterproofing function (handy for ospreys!) and an anti-parasitic function.
8. An osprey's nostril is long and slit-like (most birds of prey have round nostrils) and can be closed during underwater dives so that water doesn't enter the nasal cavities (a bit like nose-plugs in the swimming pool!)

9. Osprey are born with black eyes, then they change to blue, and then amber-brown. By the time British ospreys return from Africa as two year olds, they have changed again! Adult ospreys have yellow eyes (apart from Monty because he's special - he still has amber coloured eyes)
10. Here's one for Mum and Dad's quiz night.. All the bird of prey species in the UK have yellow legs and feet - apart from one which has white legs and feet. The osprey!

FYI \\This is the Red Fish we are seeing

Although the Pacific Ocean claims over 50 species in the Sebastes genus, the Atlantic has only one ocean perch, a slow-growing, deepwater fish with bright-red or orange-red coloring. Atlantic ocean perch are not actually perch. They’re rockfish that travel in large schools. They are called redfish in New England and eastern Canada and should not be confused with redfish from the Gulf of Mexico, which are drums. Ocean perch is a leading retail product in the Midwest, where the name “perch” is an easy sell because of its freshwater connotation. Atlantic ocean perch are found in offshore waters of the Atlantic from southern Labrador to the Gulf of Maine and on the other side of the Atlantic off Germany, Denmark, Iceland and Norway. Most Atlantic ocean perch are trawl-caught and weigh up to 5 pounds, though market weights typically range from 1 1/2 to 2 pounds.

Thanks Agnes for researching this

FMI
Aug 31 Mom in the nest with a fish

With thanks to Sue D
The ospreys have returned, and the cam is up! Not sure I like what's on the nest, though. Bev, do you know if that's part of the nest structure? And if not, will anyone will do nest maintenance or cleanup?

SueD wrote: ↑
Wed Apr 17, 2019 12:46 pm
The ospreys have returned, and the cam is up! Not sure I like what's on the nest, though. Bev, do you know if that's part of the nest structure? And if not, will anyone will do nest maintenance or cleanup?


Thanks Sue for the heads up...

..Looks like the nest took a beating from all the rain and wind .. No Sue the Osprey will have to do their own nest maintenance ..it wouldn't be wise for humans to that .. it could scare the Osprey off !

I will lock this thread and open the new one ...BRB
[/quote]
Ah, that's what I thought. Thanks, Bev! Hopefully Ethel and Oscar will cover all that up with twigs and nesting material

Nice to see them Bev and Sue....Now we hope that blows off the nest as we hope each year.
carolyn
An upside down dog is a happy dog dreaming sweet dreams.
carolyn
Top

It sure is Carolyn

Looks likes Ethel is minding the cold .. perched on the power pole stump in the nest !
5:35p

maybe this is Oscar on the nest

They have a lot of work to do, yet you know they'll do it.
carolyn
An upside down dog is a happy dog dreaming sweet dreams.
carolyn
Top

It is dark now and Ethel and Oscar are probably roosting in a tree close by!

Goodnight Ethel and Oscar, Sue , Carolyn and all!

7:34a
One on the nest .... and one perch above ... we have a visitor , beautiful young Osprey with white on her /his flared tail feathers

Cam is sticking and no You Tube Link yet!

9a
Adult in the nest

BBL ..Going for groceries and errands to do!

6:19p
Osprey perched above the nest

Ethel and Oscar on the nest

Both on the nest ..Oscar on the stump

Dark at the nest


Ethel and Oscar on the nest

You Tube will stream this cam!

Goodnight Ethel and Oscar , Ferenz and everyone !

6:27a
Raining ..Ethel is the power pole stump 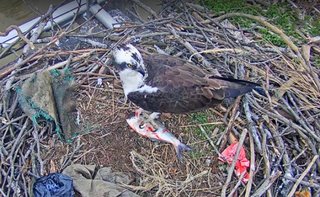 Thanks Ferenz for the scaps and the link

I agree and most Osprey nests are messy..

Ethel and Oscar will get this one fixed up... the wet spring isn't helping and some of the rubbish flew in this nest