This beautiful osprey cam is located on Hog Island in Bremen on the coast of Maine.

Warning - there are eagles and owls nesting nearby, and this pair has lost one or more chicks in each of the last three years, and that may happen again this year. Please be aware that you will be watching nature as it happens in an area with competing species.

The cam located at the Hog Island Audubon Cam and streamed by Explore. The adults are named Rachel and Steve for Rachel Carson and Audubon's Steve Kress.

The cam has been streaming since 2012; I'm not sure how long osprey have been nesting there.

2015 - the pair laid three eggs, two hatched, and sadly both chicks were taken by eagles when they were a little less than three weeks old; an eagle pair has nested nearby for at least several years without any issues, and for some reason took advantage of a time when things were quiet at the camp beside the nest to snatch the chicks; the chicks were named Big and Little posthumously by the moderator/etc team.

2016 - the pair laid three eggs and all hatched; we held our breath when it got near the time that the chicks had been taken the previous year, and relaxed a little as that time passed - but on August 1st an eagle attacked the nest and grabbed Spirit, the youngest chick, when she was about 7-1/2 weeks old; the oldest chick Bierre flew from the nest during the attack and spotted on the mainland 1/4 mile away the next day, returning the following day; Eric, the middle chick, went flat on the nest during the attack and also survived (Spirit lived up to her name by rising up to fend off the eagle - not smart, but very brave). Happily the eagle did not return and Bierre and Eric fledged successfully.

2017 - there were three eggs again in 2017 and all hatched and were named Aspen, Sierra and Bailey. Unfortunately it was a very sad and stressful year - on July 11 when the older chicks were a little over five weeks old, a great horned owl attacked the nest at about 1:20 am and grabbed Sierra; Rachel tried to defend the chick, but the owl got it off the nest. And two days later, the owl (or an owl) returned just after midnight and grabbed Aspen; Rachel was on the perch right over the nest and went for the owl but owls fly silently and fast, so by the time she saw it coming, it was too late for her to get between them. Rachel proved to be very brave and adaptive in defending the remaining chick, perching on the edge of the nest to be closer to remaining chick Bailey - and she successfully fought the owl off at least once, even though the owl had begun to grab Bailey. As if that wasn't enough, a swarm of wasps moved into the nest, and Bailey was getting stung a lot as she had no way to get away from them, unlike her flighted parents - and after several days of this, on July 29, when she was about 7 weeks old, she jumped from the nest aiming for the next tree, didn't quite make it, and fortunately landed in a soft bush below the nest from which she was rescued by a team from Hog Island. There was a second nest at the site, on the roof of the boat house 1/4 mile across the bay from the nest, and it wasn't being occupied after the young pair that tried to nest there left after one of their eggs broke - so a decision was made to put Bailey there, where her parents could find her and feed her; unfortunately, the female from the other pair was still in the area and tried to push Bailey out of the nest; Bailey wasn't injured, but almost certainly was frightened - and the team retrieved her from the boat house nest that evening, and put her on a new nest platform they built on top of their Porthole Lodge, near the original nest. That worked, and she fledged around August 10 (no cam on the platform nest) - and on September 15 when she was about 14 weeks old and had been flying for over a month and was probably getting close to migration, she was twice was attacked by an eagle; Dad Steve was with her and chased the eagle off, but she ended up in the water and was rescued both times, and there were small wounds observed the second time so she was sent to a rehabber for a checkup, where it was learned that one of the wounds was deeper than expected, so they kept her for further tests. They found that the wounds were not bad - but Bailey also had a fracture in her ulna (a wing bone) that might date back to the owl attack, and because she had been using the wing, it didn't heal properly, so they felt she would have trouble hovering, which is necessary for catching fish; they recommended a couple of weeks of rehab and physical therapy to improve her changes for a successful release. On October 8 we learned that Bailey would need to be in rehab for at least another month to give her wing a chance to heal, and at the end of October we learned she would need 2-3 more months of healing. On November 10, Bailey was transferred to the Audubon Center for Birds of Prey in Florida (migrating in style, with a direct flight from Boston), as it was getting too cold for her to remain in Maine. Bailey made progress in their 55-foot rehab barn and was able to fly up to the high perches, but she could not sustain the height necessary to fly from one high perch to another - and sustained flight, like hovering, is essential for osprey in the wild. It became clear that she could not survive in the wild - but happily the Audubon Center announced in late February 2018 that they would be keeping her as one of their educational birds, and she is now being housed with an older male osprey named Smedley whose former female companion had recently died of old age. They report that Smedley is very smitten with Bailey, and Bailey is quickly learning to appreciate Smedley's favorite activity, getting a shower each morning from the person cleaning their enclosure. I wish Bailey could be free, but my heart is very happy to know that she is safe now, and will never have to worry about eagles, owls or wasps again.
2021 Eaglet Info ~ ~ ~ ~ ~ Helpful Hints
Top 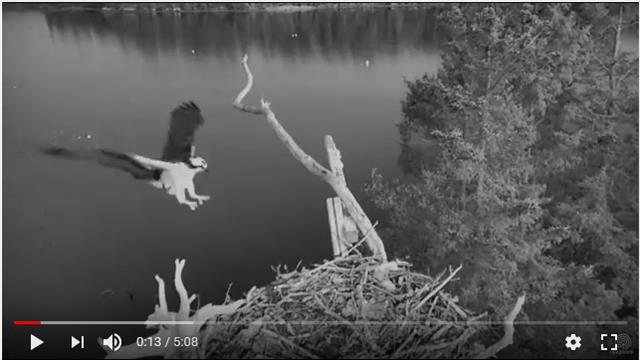 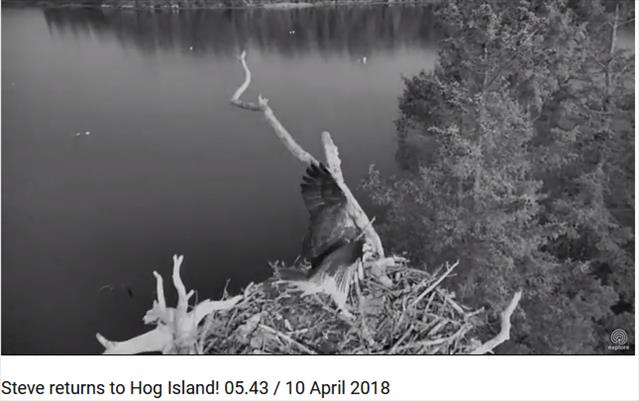 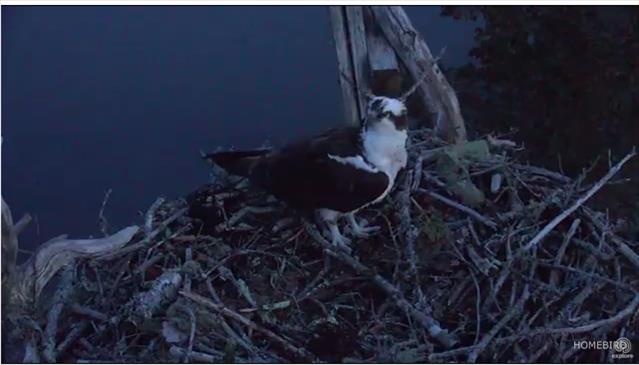 Wonderful to see him back - thanks for posting, Ferenz! And I do hope they have a peaceful and productive year.
2021 Eaglet Info ~ ~ ~ ~ ~ Helpful Hints
Top 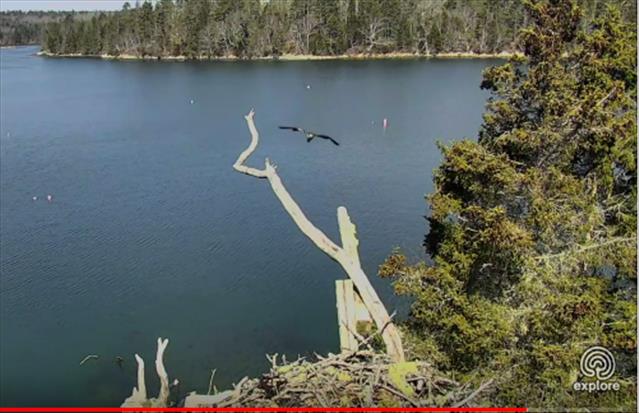 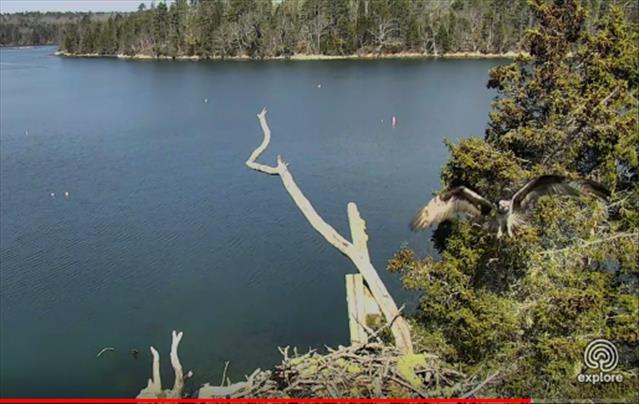 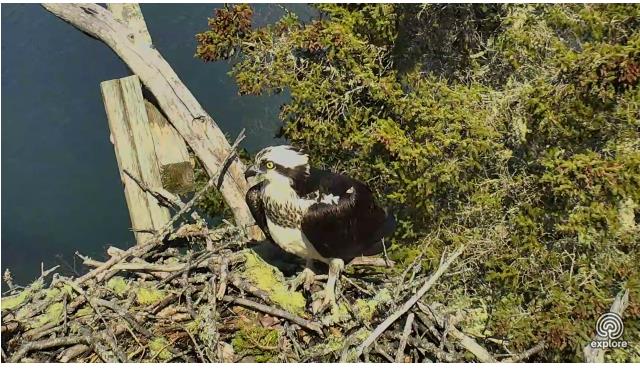 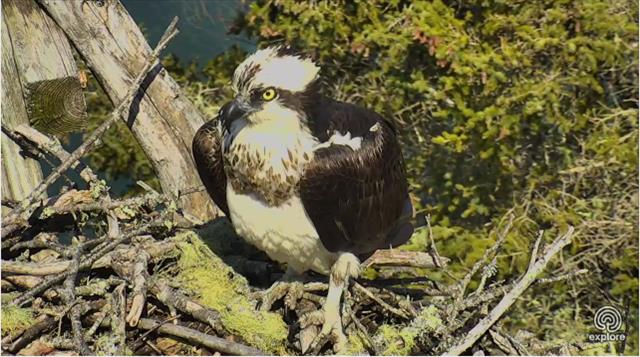 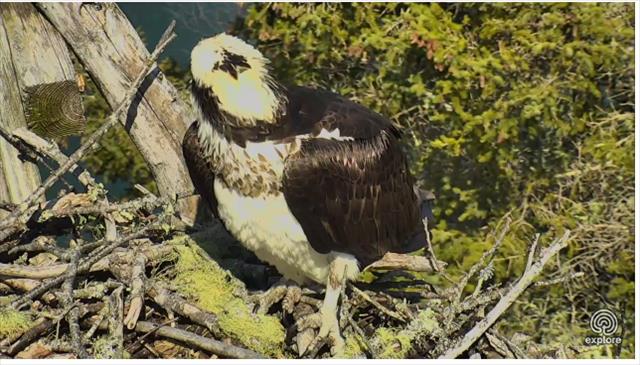 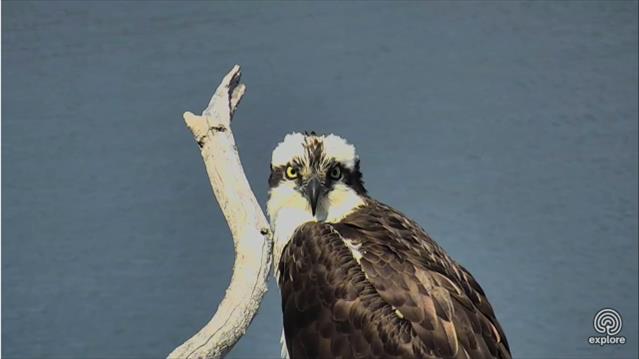 
She is baaaack! This time, the real Rachel returned to Hog Island’s osprey nest. Touchdown about 10:20 am EDT.
Hearty necklace, pale eyes and all... 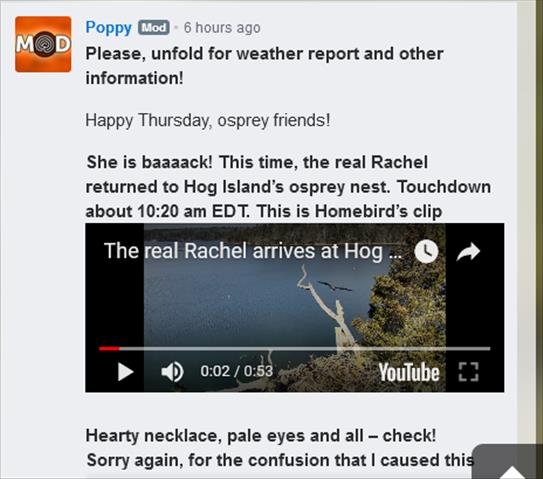 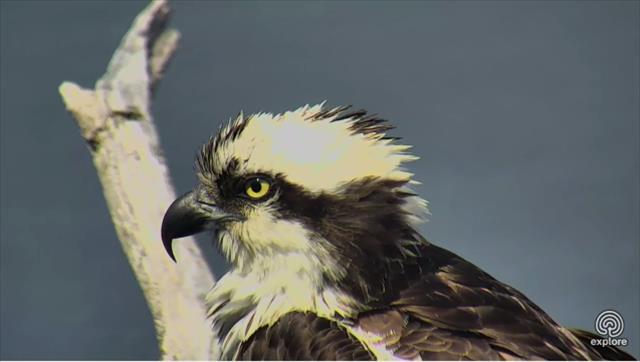 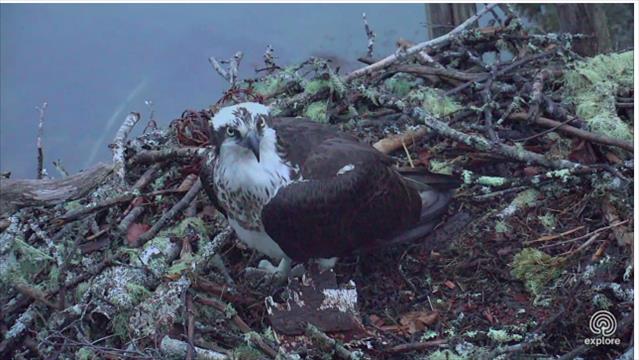 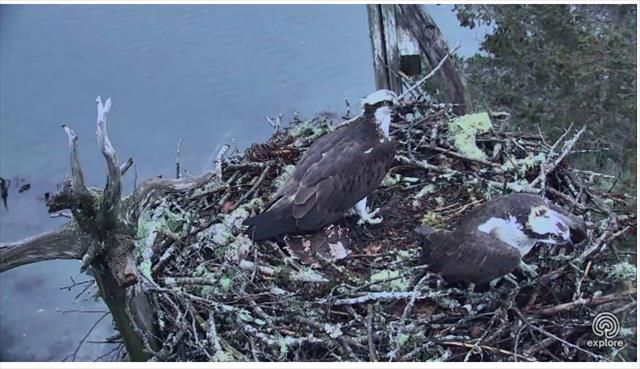 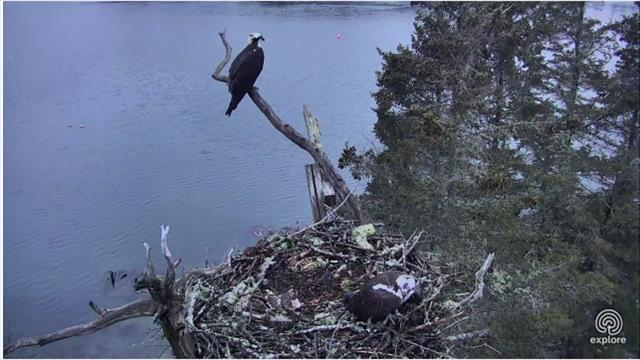 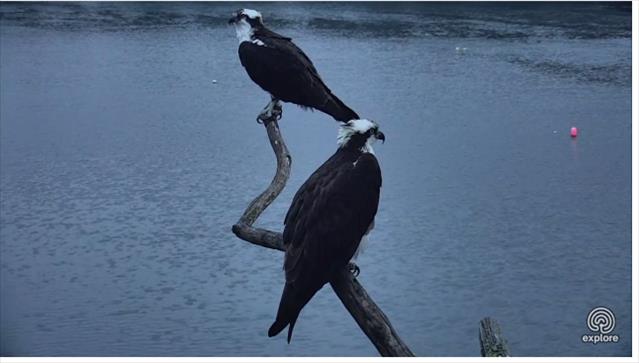 Happy to see them both safely back - such long journeys most New England osprey make each winter!
2021 Eaglet Info ~ ~ ~ ~ ~ Helpful Hints
Top

The two of them

We are officially on pip watch! Rachel and Steve’s chicks regularily hatch after 38-39 days – today is day 38 after egg # 1 was laid. The total time from pip to hatch in birds of prey varies considerably from about 30-70 hours but is usually complete within 50 hours.

Two pips in left side egg & right side egg

What a lovely osprey thread I just stumbled on.....Congratulations to Rachel and Steve, three hungry osprey chicks....
They are eager and willing to eat. Good fishing Steve!
carolyn
An upside down dog is a happy dog dreaming sweet dreams.
carolyn
Top