Welcome to the 2018 season of the Blackwater Osprey Nest .

WARNING: This camera displays a live view from a wild osprey nest at Blackwater National Wildlife Refuge in Maryland. The cam will display raw, unfiltered nature that might include wildlife interactions and weather calamities that we cannot control. We have a no-intervention policy, as we are just observers.

USER TIP: IF THE WIND SOUND IS TOO LOUD, YOU CAN MUTE THE SPEAKER ON THE VIDEO PLAYER.

See a video of our recent camera installation at the nest!

2/24/18:
We recently met with a streaming video specialist who is working with us to get streaming video/audio up on the Osprey Cam nest before the ospreys return around mid March. We're keeping our fingers crossed that all the pieces will come together in time.

March 14, 2018: The Friends of Blackwater have operated a cam from this nest for 17 years and have seen over 45 eggs laid during that time. This is the first year in which we have streaming video and audio at the nest. The nest sits on a land-based pole with the nest box about 40 feet in the air. It is located along the Wildlife Drive at the Refuge. In front of the camera (the view you cannot see) is the Blackwater River, where the ospreys like to fish. The water you can see on the camera is an impoundment pond that sits beneath the nest, and Great blue herons will sometimes fish in the pond. When the ospreys migrate for the winter, other birds -- such as bald eagles, herons, and owls -- will perch on this nest, so we will leave the camera on throughout the year.

Since 2001, the Friends of Blackwater National Wildlife Refuge have been broadcasting images from an osprey platform located along the Refuge Wildlife Drive, and since 2004, the Friends have also been broadcasting images from a bald eagle nest in a local loblolly pine tree. Learn more about these two raptor species by watching the cams and exploring the resources below.

No chicks in 2017 with thanks to Lisa .webmaster

Link to all seasons

Egg Incubation Period.. 35-42 days and we have seen eggs hatch later in some cases

2019 THE Osprey didn't nest this season.

2012
3 eggs and all hatched .. 2 fledged July 20 and 24 . 60 and 62 days old No apparent cause for the loss of the youngest chick; there had been bad weather when it was very young which may have left it weakened, and it is hard for the smallest one to compete for food.Mom last seen mid.august , Dad still there Sept.10, not sure about the chicks .

2013
3eggs in May , 2 chicks died in June
Starting June 8, only 1 egg was seen; weather was bad around that time, and this may be a new pair who left the nest for a while during the storm, but so far we don't know what happened to the other eggs.
Friends of Blackwater reported that the chick died; they noted that the parents appeared to be inexperienced, but also noted that the chick wasn't as active as most, so may have had an underlying health issue.

2014
3 eggs in April.... 3 hatched in June.. the third chick was weak from the start, and died after a couple of days.
Friends of Blackwater reported that the believe a predator (possibly eagle or great horned owl) took the remaining two chicks from the nest late June 23 or early June 24; the chicks were about 3 weeks old.

2015
3 eggs in April...3 hatched in June.. 2 fledged 57and 58 days
Sad news - the youngest one was doing really great - but something went terribly wrong the evening of June 12; an adult brought a fish, all three gathered - and the little one either fell partly into a hole in the nest or got stuck or may have been injured by the large fish or the landing of the adult with it - my guess is a hole in the nest, just large enough to trap an adventurous little chick. Rest in peace, little one - you were such a feisty little one!

2016
2 eggs.. 2 hatched in April.. by May 31..feeding behaviour observed ..
Cam malfunctioned April 25 and can't be repaired until the chicks fledge; an observer

2018 .. By Blackwater May 26, 2018: It's clear now that we won't have ospreys nesting this year on the cam. We have seen a male defending the nest, but he hasn't mated, and instead we've seen moments where multiple ospreys were using the nest as a temporary hangout. We hope next year will be more productive, but we will keep the cam online throughout the year as we have other birds visiting the nest, including the eagles

Bonding. The pair are confirming their bond from last season.

Mating, you will see the female's tail up.

Possessive, you will see a quick on and off by the male, and other indications off territory disputes.


The annual migration by Ospreys from northern breeding grounds to southern wintering spots and back again never ceases to amaze or raise questions. Here, Dr. Bob Kennedy answers a few

Read Here and Scroll Down

Osprey with fishDescription: Also known as the “fish hawk,” ospreys are raptors that are well adapted for fishing. They have long legs and large feet with specialized barbs on the pads, hooked talons, and a reversible outer toe that allows them to easily grasp fish with two toes pointing front and two pointing rear. They have an oily waterproof coating on their wings, and they can close their nostrils when they plunge into the water. They have slender bodies and long wings that are bent at the ‘wrist’. Their strong wings give them extra lift to fly up and out of the water with a heavy fish. They have a black bill with a sharp hook for eating fish.

Here is great article on

Bird Emotions
Do Birds Have Feelings?


Friends of Blackwater NWR
1 hr ·
Two ospreys spotted on the Blackwater National Wildlife Refuge Osprey Cam! We saw a bunch of couples arriving on the nests along the Wildlife Drive today. We'll post a video tonight.

Wow, what a change! I still remember that old nest and cam

Thank you IrishEyes for this thread and updates

Thank you IrishEyes for this thread and updates

You are welcome Raffs .. and welcome to this nest thread and isn't the new cam wonderful ...... I think it is the same nest just a new cam with a better view

. ... hope you will watch this nest and post here also

Look here and scroll down.. there is a short video and other pictures

I love the video and the chirping of the Osprey ...

Good Morning Blackwater Osprey and all.

8:52am
Windy at the empty nest

Not Ospreys yet... but heron!

Not Ospreys yet... but heron!

Thanks Raff .. love the picture of the Heron !

Pair of osprey in disguise?

... and heron on the backgroound again.

... and heron on the backgroound again.

Almost all day I have been watching that cam, waiting for that osprey and nothing yet.. maybe yesterday it wasnt resident pair.
Top

Raffs wrote: ↑
Mon Mar 26, 2018 4:42 pm
Almost all day I have been watching that cam, waiting for that osprey and nothing yet.. maybe yesterday it wasnt resident pair.


I watched here a lot also and I am thinking the same thing Raff ..No new updates on F B either.

Some deers running on the background.

Black vulutre! and he was chased off by the young bald eagle!

WOW Thanks so much Raff

11:06am
Adult eagle eating in the nest

and it looks like eagle is de-furring a prey 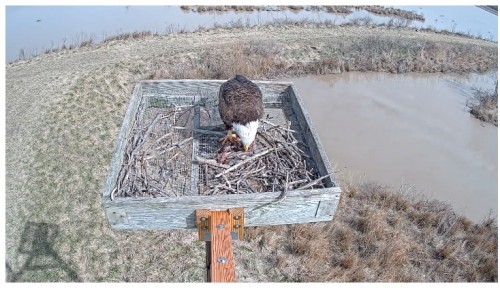 1:14pm
Eagle is gone and there is left over food in the nest

Black vulutres... but someone chased them off.. I think It was that juv. bald eagle (or osprey?)

Black vultures action was around 12:00 pm

He/she fly off... I hear a lot of people voices... what are they doing out there?

Thank you so much Raff for all the coverage here today

when adults flew off.. Juvie arrived and he stole that leftovers! Adults back with another small prey, but male didnt want to share with female. A lot of quick action today.

I think this is a pair.. one of them is smaller.
Top
Post Reply
89 posts