Nest update: Sad news. Earlier this morning we observed chick #2 moving a little but it made no begging attempts during this morning's feeding nor did it move around (although the female was blocking much of our view). Since then, we have not seen any movement or other signs of life from #2. RIP little one.

Thank so much Ferenz .. I watched at times but didn't post here ..

From below the Cam May 02, 2018Youngest Savannah Nestling DiesAfter several hours of inactivity in the nest bowl on the morning of May 2, the youngest Osprey chick appears to have died. Ultimately the cause of death is unknown; however, it’s most likely that the chick succumbed to lack of access to food or to injuries incurred from sibling aggression over the previous few days. While it is unfortunate to witness such an event, nestling mortality is not uncommon in wild bird nests. In Ospreys, older siblings have a higher survival rate than younger siblings, and nestling mortality is higher for the first 2-3 weeks after hatch during the peak period of growth. Despite the loss of their youngest chick, the adults still have a chance at having a successful breeding season, and we hope that you continue to watch and learn along with us as they work to raise their oldest nestling to fledge.

As we all know Osprey only eat fish and unlike Eagles they don't consume the bodies of their young that die on their nest .. This is only the second them I saw this on the Osprey nests that I watch..
From Cam chat

The cam is on videos ! 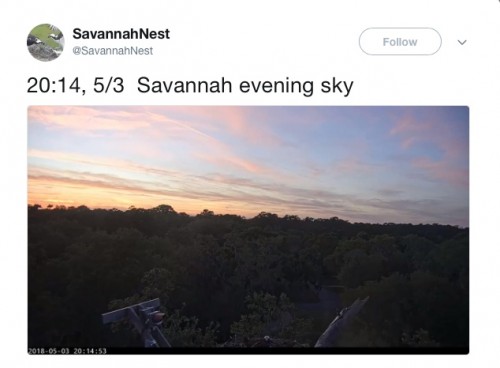 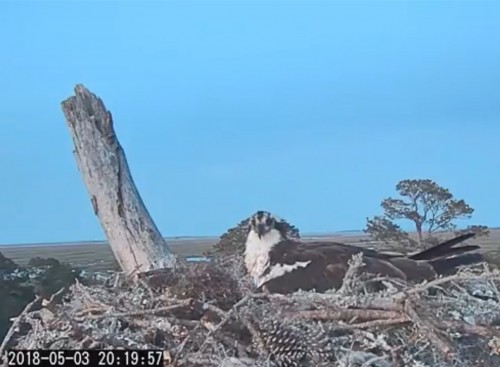 9:45pm
Mom is tucked in sleeping... brooding the chick

Goodnight to this family and all who watch this nest ..

5:59pm
Mom is on the nest with the chick

7:40pm
Mom on the nest with the chick..... we can see the pin feathers on the chicks wings 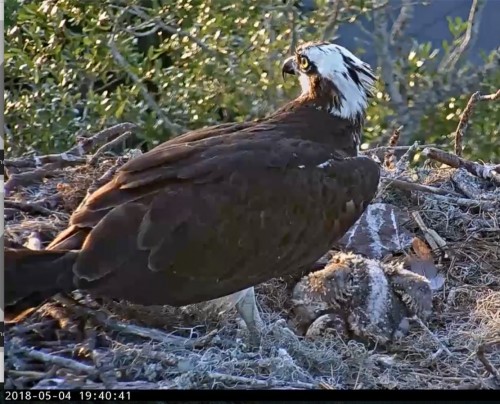 8:11pm
Mom is on the nest with the chick

Goodnight to this family and everyone !

From the cam chat ..chick is so beautiful

@SavannahNest A little of this afternoon's feeding session (watch that crop grow & listen to the chick call for food!) 5/5/18 (16:23 fish delivery feeding) https://youtu.be/8TEKk2WXauI
A few s'caps from the video

IR is on,.it is windy and Mom is on the nest with the chick

8:45pm
Mom is hunkered down on the nest brooding the chick

Goodnight to this family and everyone !

View from the other cam
4:44pm 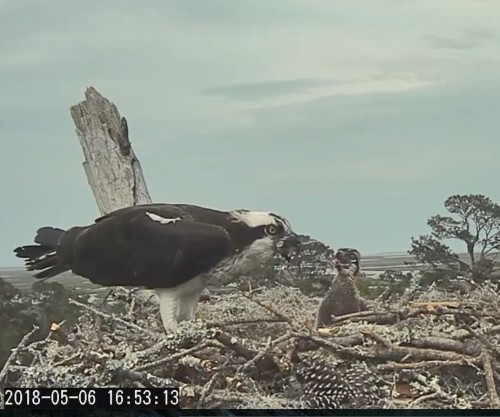 4:54pm
Chick has a full crop .Mom is calling

Windy .. chick is down in the nest and Mom is calling

? maybe she wants Dad to come and relieve her

5:07pm
Mom is calling non stop. .Chick is down in the nest and is alert

5:11pm
Mom looked all around and flew of the nest

5:20pm
Chick is so lovely Look at those eyes

Back again, and Mom is on the nest with the chick

Catch up from cam chat