i forgot to post Fridays report. sorry about that. here it is

two longer periods away form eggs ( not quite 2 hours) bu t the rest are doable. male came in after 6am again and they both left for a bit.

male sat by eggs longer today when he did come in after she left, but no incubation by him.

cam was down for a bit
I could write a longer report, and I have it but this will suffice

male rolled egg so it is out a bit

sunday march18
thanks for sat. what I could see , still two longer times away. over r an hour. i did see that fish episode, before i left yesterday.. I do have a video that I will post when time

the eggs probably will not hatch, and maybe a good thing as she needs someone on chicks when she is away. and she need help to feed.

today, is not a good day so far . the female had a real long time off this morning unless I missed her coming back. will go back and check. ( 3 hours) having said this ,the male did come in with straw once , when she was gone, an d stayed a few and left , and then came back once more.
I think she is realizing , that sh e is not getting help here, where she needs it. bu t this male will be a good male , if he can hold the site.

some are of opinion that these are his eggs. no they are not. firs t2 were laid when her mate was still here, he disappeared day after second egg. the third egg was laid, and this is normal.

these are quotes form posting at site

And now Bill seems to have vanished. He was last seen throwing uppercuts like Clubber Lang against someone looking to take over his nest. This was Friday 2.23.18. He hasn't been seen or heard from since.

have seen this with falcons also. they are in the cycle, and have mated so lay next egg.
so for new male not to be in sinc, goes without saying. but I am not one to argue the point.
this is nature and this happens sometimes. would rather eggs not hatch, than hatch and see chicks die.

Thanks bev for your report. I wasn’t on at all today. I totally agree with what you are saying. Much rather eggs not hatch than chicks left alone, exposed to the elements and no food andno male support. Hopefully this new male will stay with her and they will become a couple who can have eggs and chicks next season. Nature is what it is.
AKA: Marianne
Top

female was gone fo r one long period today. but male came in , in that time with fresh hay , stayed a few minutes and then came in again.

he has been bringing in sticks and arranging sticks. so he knows what to do to get nest ready, and that is where he is (IMO)

a lot of times when he comes in they both leave, and then she comes back not long after. do not know if they mate or what. I would give anything to be a fly on the wall so to speak

do not ant to get too involved here. just curious and learning

these go with march18

walks right over female to do this

forgot to post there yesterday. ran out of time march19

we know these eggs will not hatch and there is some snow today. but it has been interesting to watch this young male progress. He is building up that nest site like no body's business now. bringing in sticks and arranging and hay. last night he brought in a nice bit of prey for the female.

He stayed at the site for an hour when she left. he did not incubate but he rolled the eggs. it is a bit too late( which is sad) but hopefully he can maintain this site as the male. He will be good.

he dropped a stick on her LOl

male( you can see mark

sh e ate on net out of bole and male left.

will post later today. with a few photos.
it was interesting to read an observation about eagles on anothr site. . We can never assume things. our biologist always says when you think you know them, things change

the new male here, did not break the eggs. He has not incubated but in last few days. he has stayed by eggs and rolled, almost an hour sometimes. so everything is not written in stone. every eagle and nest is different. he has been rebuilding net with sticks and hay. he has brought female food on occasion.

we know these eggs will not hatch but I have watched this male progress to a good stage. this will be a good male if he can hold the site. He is a big male and seems young. he is very attentive to the female .
I have learned a lot at thi snest and that is why I chose to watch.

it has snowed most o f day and is still snowing a bit. that being said ,so many positive things today. male stayed several times, for a bit, while female was out.
we must remember , that female thinks he is incubating by this time. it is their instinct that kicks in. at first she knows that he will not but after they have established a bond , then , by instinct, thinks he will take over when she leaves.

Once again, he brought in hay and many sticks.
he did bring in a squirrel and when she tired to take it , he turned his back and flew off. but a few minutes later, he brought it back and she grabbed and flew off with it. he is learning at8:55pm- female is sound asleep on nest.

as I said these eggs should not hatch , unless miracle. and we have seen those before. but what we are learning here is invaluable.

one of their perches

male brings back squirrel and female grabs and leaves with it

just for information. some have these ready to hatch already. but not so. so much misinformation

Thanks bev. This nest is one of so many interesting nests this year. Seems to be the year for strange happenings at a few nests. And we have seen miracles happen so only the eagles know. This male looks very promising. Any guesses as to his age? Young probably. Glad you posted the egg ages too.
AKA: Marianne
Top

comments have been made about his bluish tail. I think he i s just 5 or 6 . just a guess. but he i s cute. he does a lot o f beaking
I was excited today because at 6:44am , when female left he stayed he stayed for about 12 minutes but he sat over eggs and then turned and incubate them for a few minutes.

that was only time today, but he is getting idea

Thank you so much for your reports here, bev. and Kitcat - definitely an interesting nest to watch and I'm glad you are documenting what is happening.

It is good to know that the male has done a bit of incubating - and it will be interesting to see if he starts doing more of that over the next few days.
2020 Eaglet Info ~ ~ ~ ~ ~ Helpful Hints
Top

cam was down part of yesterday. and it was down a lot of today.
so I did not see i male incubated but he is doing so much better. I really enjoy him

march 24- I have not seen male incubate today but he has stayed with eggs and he is still bringing in sticks.
female has left quit ea few times but only one was over an hour, that I saw. .

the mal e covered eggs with straw at one poing

things are about the same. it is wait and see. do not think we will get second clutch and with all the building the male has been doing , he will be disappointed when eggs do not hatch. he does disturb the female a lot with his nest building, so sh e leaves.

but except for one longer period today, the times away are of an acceptable level

the male brought in a large furry thing this morning, tug a war but female won and then she ate at nest and then flew off with it

march26
more of the same today. cam panned a bit. female did a great job. as I keep saying , she leaves nest but comes back in an acceptable time off eggs. male did do a sit lay for a bit today. he also spends a lot o f time bringing n new materials.

cam was not on today.

Cam back up and Mom still incubating tonight.

I wasn’t home today so just checking the site. Mom’s snuggled down keeping her eggs warm. Bev, I guess we will see pretty soon if miracles happen on this nest.

Pictures from the rollback today
About 4:30 pm both Mom and male on the nest. After a bit, the male flew and Mom incubating her eggs. She left and eggs uncovered for a while.

More
Both Mom and male returned to the nest and a little beaking going on. Think male flew to branch above nest and Mom settled in over the eggs . She then flew off for a her break.

8:03 pm both return and mom incubating eggs. Male tries to look under mom, even appeared to try and roll an egg.

Another picutre of male looking under mom

Male flew and mom on nest for the night incubating eggs

My name is Thomas Demma, I'm the guy responsible for "The Herm Report" over on Facebook.

I though you may be interested in a few shots from yesterday, 3.30.18. 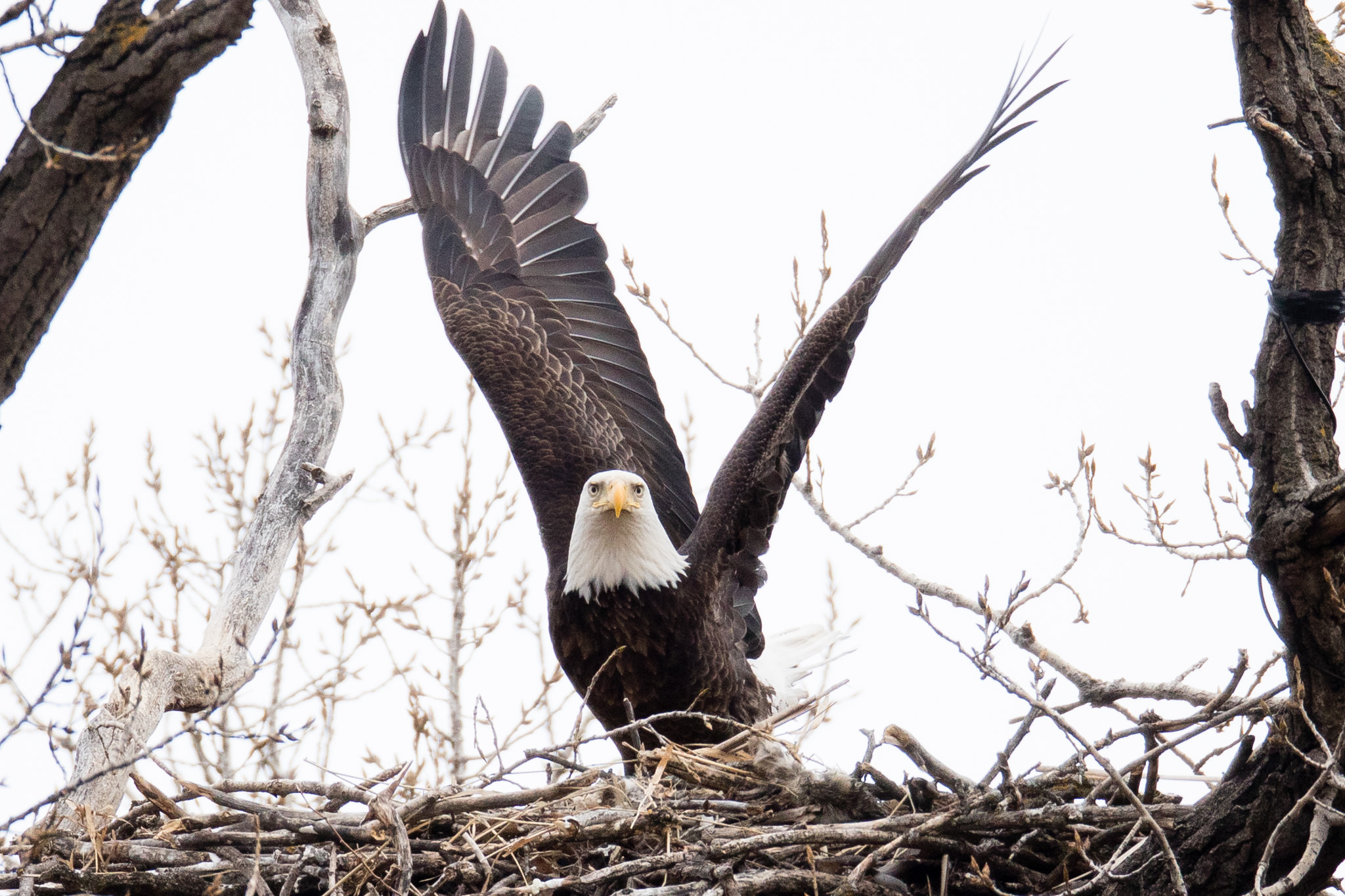 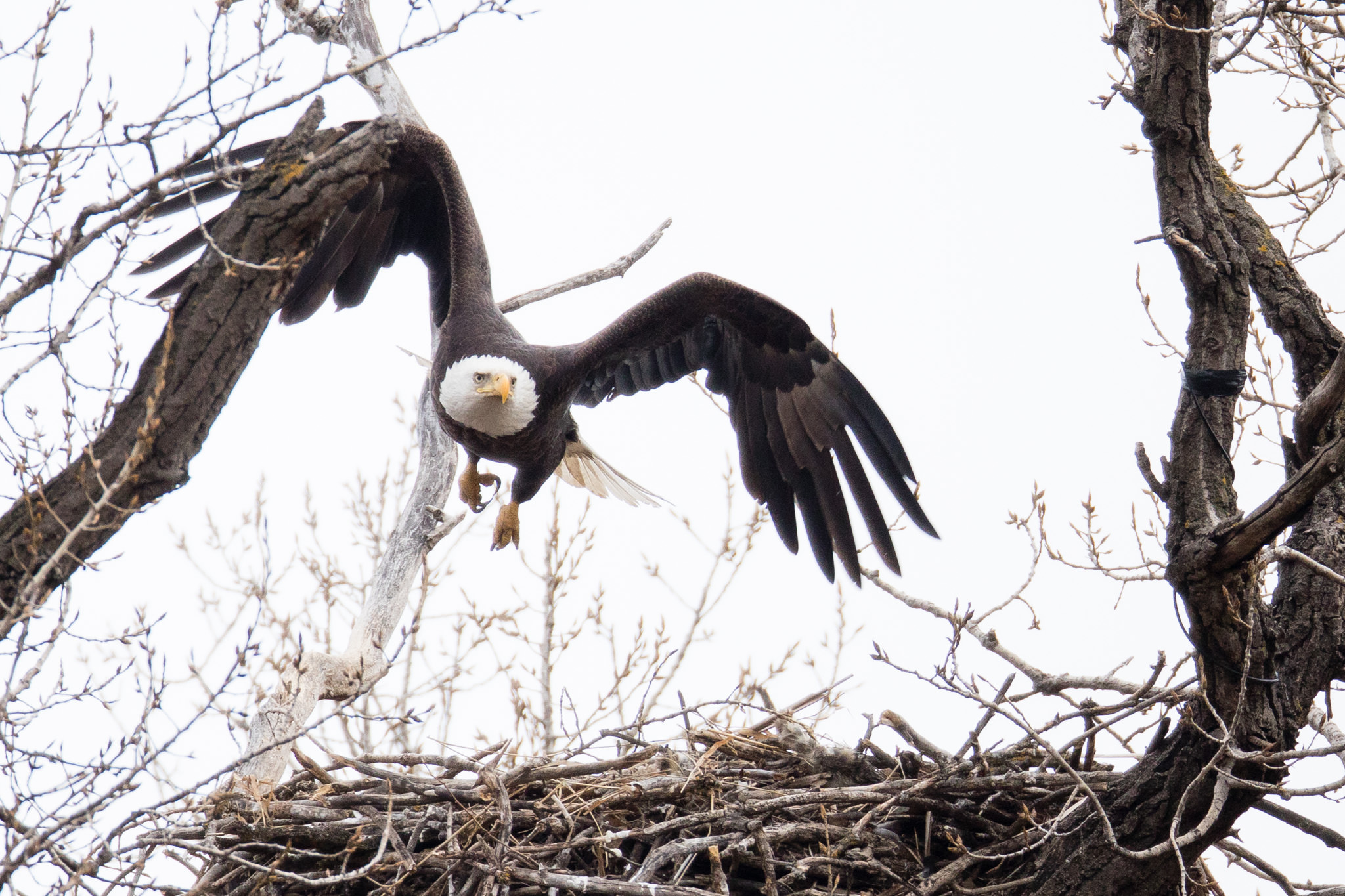 Wow, thank you Thomas for the beautiful pictures. Is that Mom or her new male friend?
AKA: Marianne
Top

well it looks like we will not have our miracle here, but I believe here was a pip on one egg an d it seemed to move. but hat day and since then they have been off eggs for long period of time. I only see one egg today.

here are some pciutres form the days I was not here. sorry, been on the ground monitoring falcons
be right back

male sits over them

then I was away yesterday. but cam was down for awhile anyhow.

so today was interesting. male brought in prey and they hassled over it. male took off and came back with it . what a tease. mom grabbed and she took off with it. male stayed at nest quite awhile. mom was away for 3 hours
male in with prey