9:58 am
Just looked up, and there's an eagle in the nest. Appeared to land on both feet. Walked without difficulty to the nest cup area and wiggled in. And - poof - was gone. Visit was about 3 minutes.

Folks from the Facebook group think this is the adult female intruder, based on her neckline and tail feathers and a few other characteristics; that had been my thought as well.
2020 Eaglet Info ~ ~ ~ ~ ~ Helpful Hints
Top

10:39 Someone just landed on the nest. Just standing there.

Decorah North nest had a very similar attack last night. Adult came into the nest and challenged the mom sitting on an egg. She was able to hold her ground on the egg during the night. Both parents were at the nest this morning with dad on a branch. He was hit a couple of times by another eagle. Both appear to be OK. I wonder if there is more competition during this egg laying period.
Top

This is the eagle that was on the nest. I wonder if it was Belle? Too windy for me to tell but the eagle never really walked the whole time and had right leg extended a bit. Even when it took off it just up and flew!

Not to get anyone's hopes up, but Belle and Smitty may have been spotted on the nest chasing another eagle away. Check out the posts on Bald Eagles 101. Video may be posted there in future, but there are pics.
https://www.facebook.com/groups/1690426617860075/

That date on the picture says January 14th. Am I looking at the picture you are referring to. In the picture it looks like they are mating or is this a picture for reference so they can be identified.
Top

It's kind of buried in the posts. Look for the post that says

and expand the comments. A little way down you will see Darlene Lewis post. Terri Bayles is getting the video ready.
Top

Ok. Thanks for the information. Will give it a look.
Top

Terri's video is posted
https://www.youtube.com/watch?v=ywhN-k2 ... e=youtu.be
Posters on BE101 say it's them. Belle on the post with an injured right leg and Smitty in the nest chasing the intruder.

Looks like they were both back again briefly around 6:20.
Top

Hello Eagle watchers There has been a lot of visits to the nest today. The intruder(s) came and went. The visits started 6:15 am. Enjoy the videos I made through out the day.

Interesting action at the nest this morning around 7am. Adult (probably intruder) and sub adult.

The intrusion at the NCTC nest continues.
Thanks to everyone that has been posting here sharing observations, captures and video footage

We still do not know if Belle and Smitty will be able to maintain their nest and territory; the situation is ongoing.

There was an early morning mating at the nest (just after 6 am) and one adult is still on the nest.

I have not had time to catch up on all the posts here since i was away for several days but i will do that tonight after work.
Hope things settle down here at this nest.
I still remain hopeful for our resident pair; have a good day everyone

855 am
Adult seated in the nest ... looks so comfortable. 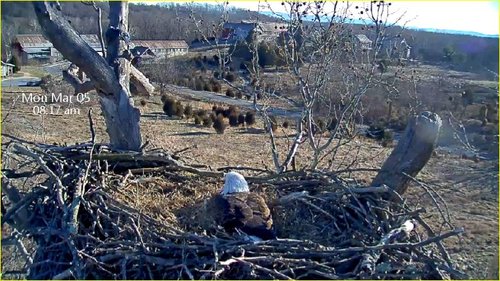 The adults were visiting the nest in the morning; incubating the non-viable egg or is it a new egg?
I was in and out and recorded some video footage so will include it below.
I never saw any egg laying behavior so that seems unlikely.

March 6, 2018 - NCTC Bald Eagles - The cams were down but are back up thanks to the USFW NCTC and the Outdoor Channel. Things appear calm this morning; perhaps the territorial dispute is settling down. I still think our resident pair still has control of this nest but we are seeing another female visit this nest too that is causing some confusion. Could we be seeing a new trio at this nest ... it is definitely a possibility. I think it is important to realize there is lots going on off the nest that we cannot see ... so hang in there everyone lets report what we see ... hopefully today is a good day at this nest and we see our Lady Belle too. When sharing an observation please include the date and time in your observation. Hope y'all have a good day ... i will be off to work soon.

836 am - Adult seated and appears to be incubating or testing the bowl. This looks like Dad to me.

I have to get ready for work ... if you are watching hope you will share an observation and include the time thanks in advance.
Top

I still believe Belle and Smitty are our resident pair

yet we are seeing another female at this nest too, which creates confusion for all of us.
Top

1:39MT- eagle just arrived behind Y branch do not know them enough to kno who it is
and jsut flew

4:02mt ( there was no time stamp so I put my timeMT march7th

male landed , then female on nest. I will post for you after. male left( judging from size)
bigger eagle is still there and just flew

this eagle appears not as steady on left leg. left leg in front a bit

but could all be camera angle also

I have done a wee video of this , which I will do up shortly.

could it have been male that had injury.

I do not know these like you do. I have followed this site for years. stayed up all night watching one year as a big snow storm had female buried and she laid a fourth egg that year. ( during storm) cannot remember how many hatched that year. I was there before Smitty.

I have never seen a new female incubate anothers eggs, unless it had one of its own also. ( just t my thought)

I am a berry watcher and just to give you some hope about injuries. look at ma berry. in spite of her left leg, she has hunted, brought in branches,brought in coot, etc. and cared for her B10 . pa berry had a talon injury also and it healed so be strong. it is tough world out there for them . so keep your
chins up. I know how attached we get to them.
if we now have resident pair here, another egg can still come. ( norfok: the year buddy was born. lost first eggs to owl attack and attack of another female. we did not see ma norfolk for a few days, and then she appeared and laid another egg in adjacent nest. ( that turned out to be buddy) .

will check when I can but do not want to butt in here.
video will be coming in a few. for some reason it is not ready yet, but will com eover an dpsot whne it is done

have a great day

to all who watch here, hope season turns the corner

hope you can tell who is there,

her e is the video. now that i watch, I believe male had a twig in left talon and that is why he appeared unsteady

so who do yo u think you have. fingers corssed

11:43am MT
eagle just landed an d it i s looking around

if time will try an d post a few more shots.

I have time stamped in MT

eagle on nest, eating . will post photos for you later. could have been here for a few

9:16am - now a sub adult on nest eating . maybe same one as you had earlier in season

goes up to branch

i have more to post in a bit but at11:19MT
adult lands in nest

Things are still evolving at this nest ... we do not know if Belle and Smitty will be the resident pair at this nest or if we will have a new pair ... lots of view points on that ... and we all know how difficult can be to tell the birds apart at times

There was a pair on the nest early this morning; then a young eagle stopped by.
This afternoon a solo visit by an adult eagle.

Some captures of the youngester

Great to see you here ... I just read back ... many thanks for your nest observations, screen captures and videos

an adult stopped by after youngster debs. have several shots. did a video as it called out and flew up and then saw it fly under and out , shortly after an eagle landed on nest , and then went o branch way over and stayed for a bit . do not know if same one. hard to tell

here is long series of pciutres and I stamped them MT

digs in same corner as youngster

is watchful and vocal