This morning at 10:05am I looked through the telescope and was surprised to see either Ma or Pa perched on one of their favourite branches!

Welcome to this thread. If you visit the Stalashen nest in Sechelt you are welcome to post comments and pictures here.

Earl & I have been watching this nest in Sechelt from our living room, through a telescope and binoculars. The nest is located at the corner of Stalashen Drive and Titalshen Avenue. We have been following this nest since 2008. When we first started reporting on the nest we had talked to a few of the people living close to the nest and they said that it has been there over 20 years. Unfortunately, it did blow down in July 2009 after a windstorm but we are happy to tell you that the eagles built a new nest. When the nest blew down one of the eaglets had branched and the 2nd one was fine also, the eagles fed them on a branch before they fledged. We look through our telescope at this nest which is about a mile and a half away. We can only see them clearly in the morning or evening due to the glare from the water and thermal interference.

At the beginning of this season we thought that there were 2 eaglets in this nest but on May 19 we could only see one eaglet through the telescope. We don't know what happened but what was believed to be an eagle wing was found on the ground by two of our members Karen H and Aspen. Karen H stated "At the time we didn't know if it was from the missing eaglet or another bird". As stated on the thread I contacted Gibsons Wildlife but they had not had any report of an eaglet found on the ground.
2018 - September 18 Ma or Pa returned (I assume it is one of them).... 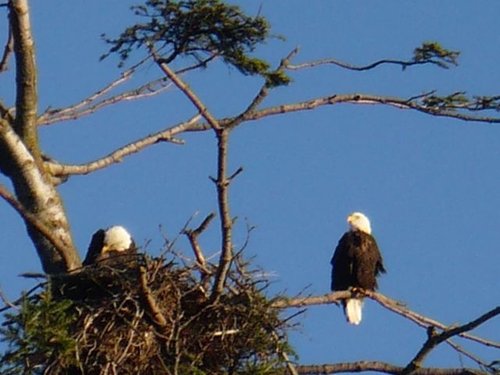 Map of the area. The tree is near where figure 2 is on the map it is not far from the water.

One of our eagles is back!
This seems early for this nest.
Last year we saw one on October 1st although the year before it was Sept. 19th.....

Thanks Marg for the heads up and it is wonderful to see on the eagles back ..

Looking through the telescope.
After not spotting the eagle for a few days I saw it on a different branch today 12:58pm. 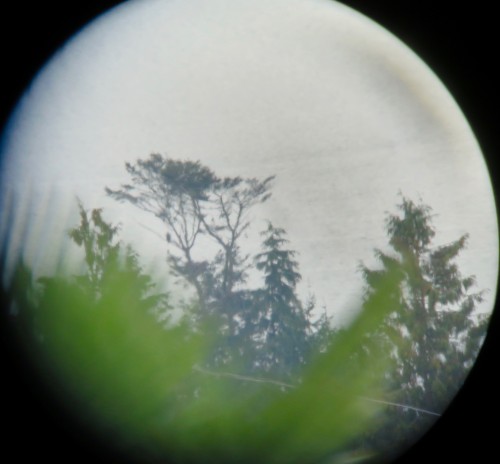 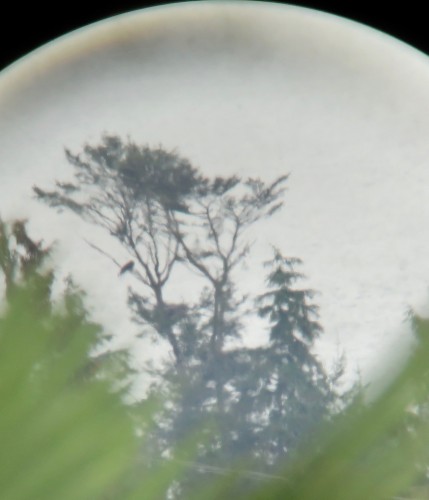 We don't have very good weather for taking pictures.
Member since 2006

Wonderfull you saw the eagle Marg !

I don't know where it went Bev but it returned to this area on Sept. 18th. Thanks.

Maybe it took a look around the area Marg !

6:34am I took a look and saw the Stalashen eagle perched at the top of the tree.

4:53pm
Looked through the telescope today and saw both Ma and Pa on a branch in the nest tree! 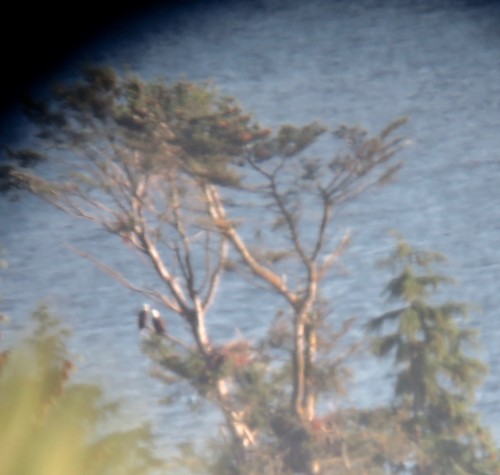 was in the nest and one

About 6pm one eagle was perched in the old nest tree.
Member since 2006

Sorry you didn't get to see Ma/Pa on Friday Sandra they are being elusive.
Member since 2006

It was reinforcing to see drops of whitewash on the road below the nest, despite no eagles nor random sticks on the ground.

Hoping for a successful season this year!

Through the telescope around 5pm.

One eagle in the nest possibly eating. It was very windy and the tree was swaying.

Sandra, I just saw your post thank you, I do hope that we have a successful season this year.
Member since 2006 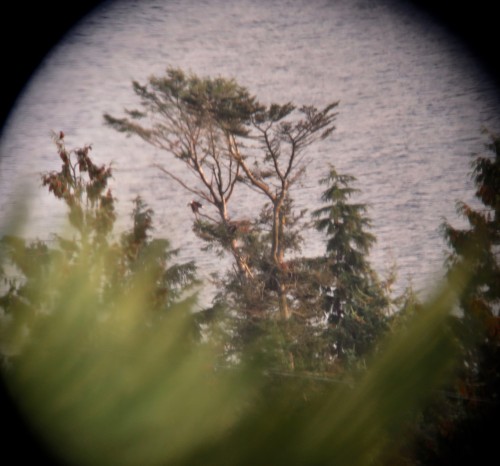 for a successful season here !

Marg glad you are seeing the Stalashen eagles most days!

Member since 21 June 2006
Volunteer Nest Monitor for WiTS (Wildlife Tree Stewardship Program)
If you find a new nest, please contact me so it can be added to the WiTS mapping program.
Top

Thanks Kay.
Yes, I saw them both today around noon perched on a branch.

I hope that you are able to get out soon to check your eagles.
Member since 2006

Through the telescope!
Ma or Pa is perched on a branch in the nest tree.

They are both around. I did see one (almost) hidden perched in the old nest tree yesterday.
Member since 2006

This afternoon I saw one eagle at the top of the tree it looked like Pa.

I heard from a friend who lives close to the nest:
He heard that Port Stalashen has a rat problem and have hired an exterminator who has placed poison there.
Apparently, the male that was here last year has been replaced with a much friendlier male. The eagles seem to be talking much nicer, so we will wait to see if we get eaglets this year.

An eagle was found in the area a year or so ago that I believe was poisoned.
Member since 2006

I was most surprised on entering the subdivision on Tues, Oct 16 to find an eagle perched in the stand of 3 evergreens at the corner of Mission Rd and Stalashen Dr, left side going in! That was a first for me! There was eagle calling coming from the area of the creek but I couldn't see one perched. None in the nest tree but on leaving, I spied one perched in the old perch tree.
On looking at my pictures it appears to be the same eagle that was on the corner. What I didn't notice until looking at my pictures was the female eagle down low in the old perch tree below the male! Hmmm.
No sticks on the ground under the nest tree, only a few small splatters of white on the road below. 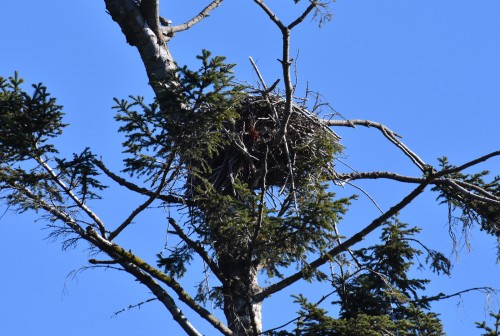 Perched on the corner.

Both in old perch tree.

Saw one eagle on a branch early this morning in the nest tree.

Sandra, I have seen both eagles in the perch tree, once I saw one and when I looked again almost hidden behind the trunk was the other one.

Through the telescope.
I took this picture yesterday they are both in the tree one on a branch and one in the nest. 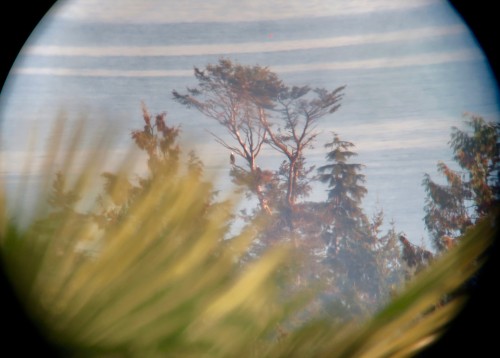 Through the telescope.
This morning I saw one eagle on a favourite branch.
I have seen one or two in the nest tree several times over the past while. I saw one in the nest eating something a few days ago.
Member since 2006

Through the telescope.
One on a branch this morning it looked like Ma.

MA/Pa on a branch in the nest tree.
Through the telescope. Taken around 8am. 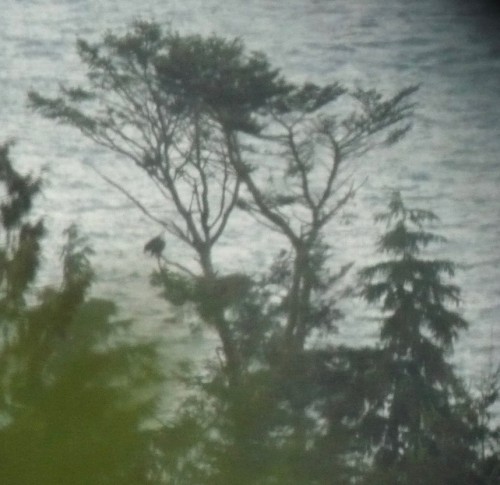 Return to “Archive - Nests in BC - with Ground Observers”